The posters were huge and the cheers were loud when the kids finally returned to their classrooms.

"One of my friends almost strangled me," said Sitara Mazumdar, 11, describing the frenzy of hugs that enveloped her when she bounced back into school, fresh off a plane she boarded 10 time zones away but barely jet-lagged because of all the excitement.

Her brother, Sameer, was greeted like a Greek hero returning from an odyssey and posed in front of a poster his squad of fellow 6-year-olds made for him: "Back In The PACK."

After nearly three months trapped in a frightening immigration limbo, the family returned from India to their D.C. condo, to their schools and jobs, to their friends and their lives. All it took was one stamp on a passport. 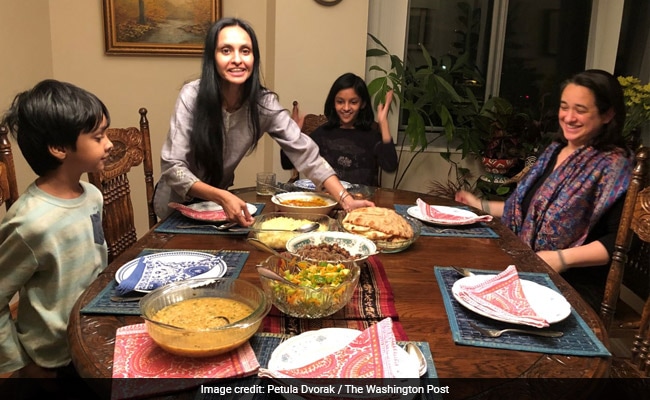 The Mazumdars, who have lived legally in the US for decades, were stranded in India for 3 months due to a broken US immigration system

Many other legal immigrants have been caught in the same State Department mess, as longtime holders of H1B visas are suddenly denied a renewal and are trapped in their native countries. Even if, like Saurav Mazumdar, they've lived in the United States for nearly two decades.

Mazumdar, 42, went on a two-week vacation to visit relatives and renew his H1B visa this summer, joining his wife, Ishita Menon Mazumdar, and his kids, who went ahead of him to maximize grandma time.

The routine trip - one Saurav takes every three years as he waits to become a citizen - turned into a nightmare when the U.S. embassy denied his renewal but gave him zero answers about why.

School started, the kids missed lessons and still the Mazumdars got no answers.

They shoe-horned their family into Ishita's parents' home. Saurav stayed on U.S. time and worked from home; the kids kept up violin lessons and friendships over Facetime.

They hired an immigration lawyer. Saurav sent message after message to the embassy, always getting back a template response.

"What do you do? It was very frightening," Ishita said.

The Mazumdars were both educated in the United States after moving here two decades ago and are highly specialized in their fields: he in data engineering and artificial intelligence, she in political science. They shouldn't have problems renewing worker visas because they are highly skilled.

They nevertheless got caught up in a broken system that hurts some of our most highly skilled immigrants but also allows the entry of thousands of less skilled workers who displace Americans from their jobs. It's a complicated problem that needs to be fixed, but the discussion in Congress never seems to advance beyond a rally cry.

I heard from immigrants with painful stories. One was a man trapped in India for seven months, missing the birth of a child. Another was a man who started his own company in Texas, watching it slowly die as his bills piled up and he couldn't return to run it.

There were upsides to the Mazumdars' situation. The kids found those, of course.

Because their summer trips to see family ordinarily end when school starts back up in D.C., they've missed India's festival season. This was the first time they got to see what a Diwali celebration, the Hindu festival of lights, looks like in India.

"Sparklers and the ones that shoot up and look like a flower!" Sitara said. She became a fearless pyrotechnic expert in a matter of hours, joining in the revelry in her grandparent's hometown outside New Delhi, where the celebrations are more vibrant and daring than in a big city.

They established their favorite juice place and got to know the neighborhood. Their Hindi got really good.

Saurav found himself in that weird place that many immigrants find when they return to their native country after so many years in a new home. He often feels more American than Indian.

"The interactions - constant. The people are everywhere, you're never alone," he explained, complaining he didn't even get to watch his favorite TV shows in peace. There was always a family member or a housekeeper or even a milkman there to comment, to chat, to interrupt.

Personal space, people! It's an American thing, he supposed.

Sitara took over her little brother's education, putting together power points and lessons in math, science and reading.

"I even gave him a report card!" she said.

He got mostly As.

And Ishita, who earned her PhD from Georgetown University, got to teach a little when she home-schooled Sitara.

When I wrote about them at the beginning of October, their story went viral in India. It was online, in the papers and on television. Saurav even saw a news ticker chyron crawl across the bottom of the TV screen with his family's name and headline on it while he was watching a major cricket match.

The embassy communications continued, with little change. And Del. Eleanor Holmes Norton, D, made some noise to bring her constituents back.

Every day, Saurav checked his status through the State Department's system, and every day, it said "Administrative Processing." Until Oct. 28, when his status was suddenly listed as: "Issued." He eventually got his passport back, and they booked the first flight to Dulles they could find. They didn't really exhale until they made it back to their home in D.C.

The kids received a rousing welcome back at their schools. The neighbors in their building were happy to see them back.

They have three years until they must go through another visa renewal process. And a lot can change in America in three years.

(Petula is a columnist for The Post's local team who writes about homeless shelters, gun control, high heels, high school choirs, the politics of parenting, jails, abortion clinics, mayors, modern families, strip clubs and gas prices, among other things. Before coming to The Post, she covered social issues, crime and courts.)

(Except for the headline, this story has not been edited by NDTV staff and is published from a syndicated feed.)
Comments
The MazumdarsWashington Family Stranded In IndiaUS Immigration System