'Yuvraj As Dulharaj' And Other Amul Ads That Made Us Giggle 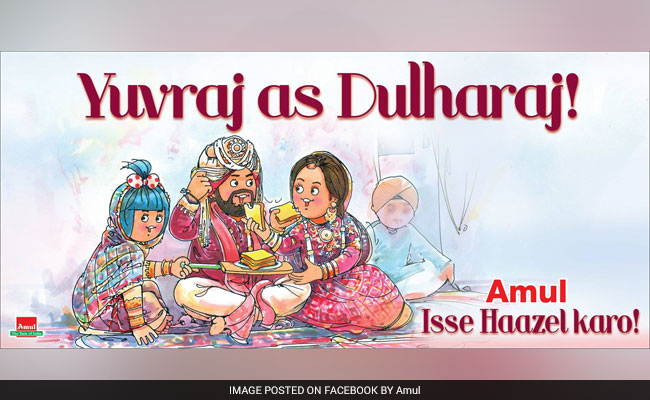 Yuvraj Singh is a married man and cricket lovers everywhere are rejoicing (barring the few who've been left heartbroken). And joining the world in congratulating the ace cricketer on his new innings with actress Hazel Keech is dairy cooperative Amul.

Popular for their ads on all things current, here are 10 of Amul's best ads from the world of sports and sport stars in India.

1. 'Yuvraj as Dulharaj:'From six sixes to saat pheras as the brand puts it, here's wishing Yuvi and Hazel a happy married life together.

2. A special tribute to M S Dhoni, Virat Kohli and the rest of team for sporting the names of their mothers on their jerseys. Aww...

3. This special ad when Indian Test skipper Virat Kohli received the ICC Test Championship mace for leading India to the number one rank in the world. A proud moment indeed.

4. This one saluting Ravichandran Ashwin for joining the 200 wickets club in Test cricket. Ashwin became the fastest Indian and second fastest overall to achieve the feat.

5. And this one celebrating India's landmark 500th Test match.

6. "On para with the best," said the ad when India's paralympians did the country proud.

7. And this one when Badminton ace P V Sindhu won silver in the women's singles at the Rio Olympics this year.

9. This adorable 'gym-nashta' one for Dipa Karmakar who became the first Indian woman gymnast to qualify for the 2016 Rio Olympics.