Woman's Mirror Selfie Is A Viral Optical Illusion. Do You See It?

Hint: It's related to her clothes 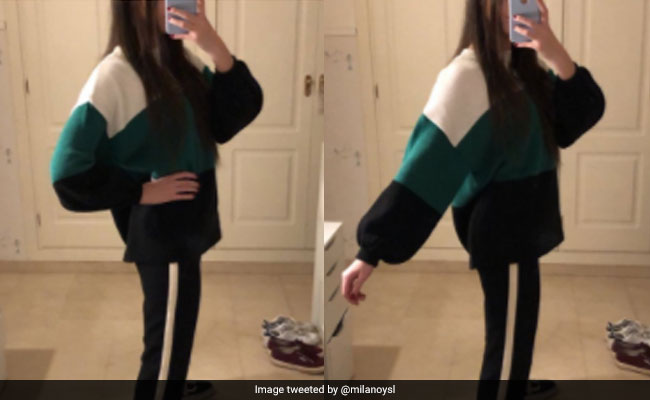 On Sunday, Marisol Villanueva from Spain posted an innocent mirror selfie on Twitter. All she wanted to show was how she paired two clashing patterns - vertical and horizontal stripes. But Twitter couldn't help but notice something strange happening in the photos. It wasn't her clothes.

The woman wore a horizontal-striped oversized sweater with black track pants that had a vertical pinstripe running down the middle. Twitter ignored her clothes and promptly pointed out the photos made her legs appear really skinny, like really.

Can you see it?

The pinstripe on the pants made her perfectly normal legs look like something that belonged to a cartoon character.

Twitter immediately noticed the optical illusion. Some even expressed concern about her health

why was this the first thing that i thought of... pic.twitter.com/qd21XgdMyX

I thought that someone had put a Gru legs on you. Greetings from Mexico. pic.twitter.com/WSioIr9fyt

Her legs are just fine, she clarified with this hilarious tweet.

Here's the explanation behind the bizarre appearance

Go ahead and open both the photos to see how your mind was playing tricks with you.

Promoted
Listen to the latest songs, only on JioSaavn.com
The optical illusion went viral and transcended through online platforms and even countries. In two days, the post was retweeted 6,900 times and collected 41,000 favourites.