Woman Teaches Dog To 'Speak'. Videos Will Amaze You

"Stella frequently says 'look', waits for us to turn toward her then says her message," writes her owner, Christina Hunger 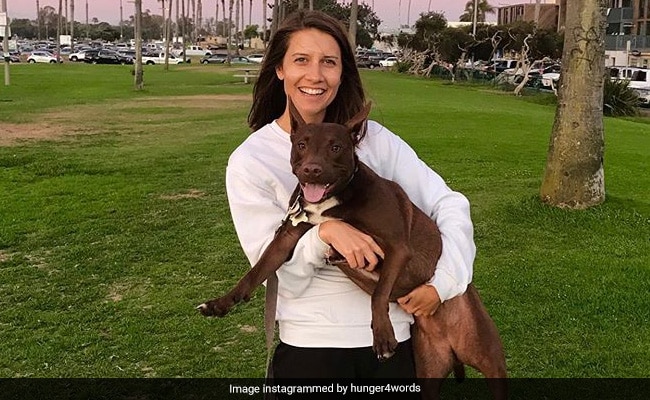 Christina Hunger has taught her dog Stella how to communicate.

Stella may just be a dog, but she knows how to communicate. Her owner, Christina Hunger, is a speech pathologist who is teaching her how to 'talk' with the help of a customised keyboard. The keyboard consists of 29 buttons for 29 words like "come", "play", "look" and "park". Whenever Stella wants to express herself, she pushes the corresponding button with her paw, sometimes even combining four or five words together to form a sentence.

Stella, who lives in San Diego with Ms Hunger, has become something of an Internet celebrity for her amazing communication skills. Her videos, posted to Instagram where she has 4.7 lakh followers, often garner thousands of views.

In one of the videos, Stella can be seen desperately pushing the "look" button, asking her owners to investigate a sound she heard outside.

Stella uses language differently when she's in a heightened state versus when she's calm! • Today when she heard some noises outside and wanted to go investigate, I told her we were staying inside. • Stella responded by saying, “Look” 9 TIMES IN A ROW, then “Come outside.” She was clearly in a more frantic state, and her language use matched that. We all sound differently than normal when we're in distress, Stella included! • I'm impressed that Stella is communicating with language during her more heightened states, not just when she's calm and in a quiet space. This shows me that words are becoming more automatic for her to use. It's similar to when a toddler starts using language to express himself during times of frustration instead of only crying. That happens when it's easy for the toddler to say words, not when he's still learning and it takes a lot of focus to talk 🧠🗣 • • • • • #hunger4words #stellathetalkingdog #slpsofinstagram #speechtherapy #AAC #ashaigers #slp #corewords #SLPeeps #slp2be #earlyintervention #languagedevelopment #dogsofinstagram #dogmom #doglife #dogs #guarddog #animalpsychology #doglover #dogvideos #sandiegodog #catahoula #blueheeler #smartdog #dogcommunication #mydogtalks #animalcommunication #interspeciescommunication #loveanimals

In another, she pushes "Now now now now Stella Stella look," to command her owner's attention.

"Like any great communicator, Stella is making sure she has our attention while she talks," explains Ms Hunger on her blog. "She frequently says 'look', waits for us to turn toward her then says her message."

Stella shows us that communication is way more than just saying words! This morning while Jake was on his computer and I was reading, Stella wanted us to look at her. • After she told us “Now now now now Stella Stella look,” Stella patiently waited for us to understand what she was saying. When I finally “got it” and told her I was watching, Stella pounced on her ball. • Stella got our attention by telling us to look at her, waited for confirmation that we understood, then went ahead and started playing. • Successful communication includes sharing a message with someone, waiting for them to respond, understanding their response, and responding or acting accordingly. I love that our little talking dog is such an amazing communicator! 🐶🗣💫

The videos have gone viral online, leaving thousands impressed. "I love Stella the talking dog!!" wrote one commenter. "This is so cool" said another.

According to Inside Edition, Ms Hunger taught Stella how to 'speak' by putting different buttons around the house. "I just figured she needed another way to say the words she already knows," she said.

As for Stella's favourite word, it is "outside". "She definitely says 'outside' the most. She absolutely loves being outside," Ms Hunger said in an interview with CNN.

What do you think of Stella the 'talking' dog? Let us know using the comments section.