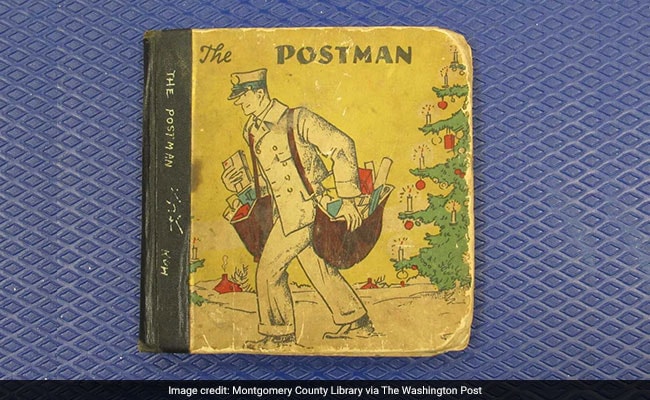 This copy of "The Postman," by Charlotte Kuh was checked out of a library in 1946.

Don't blame Marie Kondo. Mora Gregg, a retired librarian in Toronto, was simply dusting a bookshelf in her one-bedroom apartment last month when she happened upon an item she'd been hanging on to for a bit longer than Ms. Kondo might recommend.

Slipped behind other books was a lovingly worn copy of the 1929 children's book "The Postman," by Charlotte Kuh. Gregg's mother had checked it out of a Silver Spring, Md., library in 1946, when Gregg was a toddler.

"I really love that book," she said by phone. Though the words "Property of Silver Spring Library" are stamped on its inside cover, this "was the first time it came to my consciousness that it was overdue," she said. "I never thought about it, or if I had, I was just too busy to do anything about it."

This time she did. She sent the book, along with an apologetic note, back to Silver Spring. "I was just expecting a thank-you note," Gregg said.

She got a lot more than that. News of the book's return traveled quickly across the web, and Gregg has been fielding calls from the media since. "All I did was return an overdue book!" said Gregg, who was relieved to learn that she was not responsible for a fine. Montgomery County does not collect overdue fees on children's books (anyway, it caps fines on other books at $15).

Gregg, who left the Washington area in 1946 for London, Ontario, where her father worked in the scrap-metal business, says she remembers reading the book hundreds of times, often with her mother, who took her to the library weekly. In Canada, Gregg was allowed to check out only four books at a time, and she's pretty sure she returned them all promptly. (If she finds one behind another shelf, I'm sure we'll hear about it.) Gregg says she read "The Postman" to her daughter, who also became a librarian. (That's not the only thing that runs in her family. After her mother died, Gregg found an overdue copy of a Colette book in her house and returned it. Hidden behind the family mantle, Gregg later discovered an overdue library notice sent to her older brother.)

Illustrated by the noted children's artist Kurt Wiese, the book - a sweet tale of a very pre-Twitter age when the written word traveled by pneumatic tubes and horses - is out of print. Anita T. Vassallo, acting director of the Montgomery County Library system, said the county hadn't yet decided what it would do with the book. "It's in good shape ... but fragile," she said. "We may try to have it displayed in some way that is archival, perhaps at Silver Spring, or perhaps at our Noyes Library for Young Children."

Until Gregg's dusting discovery, the book was one of just a few on display in her apartment, where she lives on her own and has just two Ikea bookcases and a small stack of spillover. "When I buy a book, I get rid of a book," Gregg explained. "It's just a space thing. If I get rid of one that I miss, I go to the library." Luckily for Gregg, there's a copy of "The Postman" in a branch not far from her home, "and it's a fast read."

Q: Are you a keeper of things - or a book collector?

A: No, no. I live in a small apartment. I'm not a book collector, but because I'm a librarian, I've helped people clean out family libraries after someone has died, and after doing this three or four times, I started to get allergic to old book dust. I dust fairly often.

Q: You didn't have to pay a fine on "The Postman." Do you think you should have?

A: No. I think what they do in Montgomery County for overdue children's books is good. Anyway, I figured I could talk my way out of it.

Q: As a former librarian, what's your opinion on book fines?

A: Modest fines are an incentive to return or renew books for adult literature. I get fined all the time, and I pay up. Fines are always modest, but it does add to [a library's] coffers.

Q: When you were a librarian, what did you do when a book was very overdue?

A: It happened a few times. People would retire and clean out their offices and find a library book they'd forgotten about. I considered it kind of normal. I'd check the collection to see if we still needed it and would send a thank-you note. I wouldn't fine them; we'd forgive the fine.

Q: You could have kept 'The Postman.' Why didn't you?

A: I could have! Then I thought, I could have put it on the market. But because of its condition, it would probably get thrown out. And I didn't want to see that happen.

A: About $5 probably, for a book I misplaced.

Q: What's the last library book you checked out?

A: I have a few. "Fun Home," a graphic novel by Alison Bechdel (for book club), "The Red Car," by Marcy Dermansky and a couple of guides to Paris for an upcoming trip.

Q: When are the books due?

A: I haven't the faintest idea. I always ask for a library slip, which I promptly lose. I can always go online when I start to get worried about the due date. And if they want it back, they'll send me an email.

Q: Do you plan to return them on time?