18.5 million views for the video - and counting. 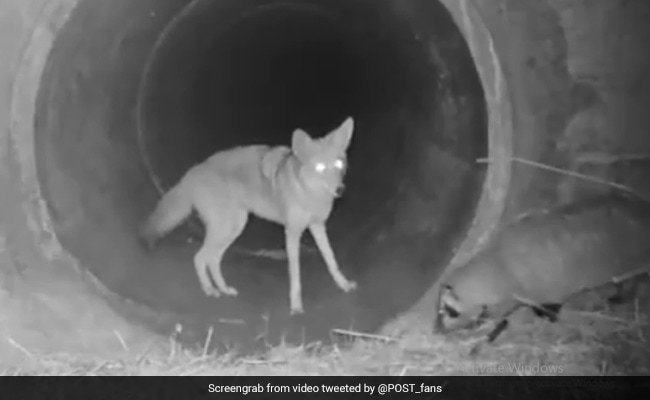 A badger and a coyote were filmed walking together in a culvert in California.

An unlikely friendship between a badger and a coyote has been recorded on camera for the first time ever. The two animals were spotted trotting side by side under a busy highway in California's Santa Cruz Mountains. The video, taken by the nonprofit group Peninsula Open Space Trust (POST), has gone viral online with more than 18.5 million views on Twitter.

National Geographic explains that the video shows a playful intimacy between the badger and coyote that has never been observed before. While coyotes and badgers have been known to hunt cooperatively, those interactions were thought to be "purely transactional".

Here, the coyote is seen wagging its tail and bowing down playfully as the badger approaches. Meanwhile, the badger's body language is relaxed as it follows the coyote into the tunnel and even lifts its tail to keep pace with its friend.

A coyote and a badger use a culvert as a wildlife crossing to pass under a busy California highway together. Coyotes and badgers are known to hunt together.

While the unlikely friendship has left social media users delighted, the video, according to National Geographic, also presents an important discovery for scientists. It is the first time that coyote-badger cooperation has been filmed in the San Francisco Bay Area. It is also the first video that shows the two species sharing a culvert - a tunnel carrying a stream or open drain under a road or railway.

"To our knowledge, that's the first time that's ever been observed," Neal Sharma, POST's wildlife linkages program manager told CNN. "Having that interaction on film and seeing how these two different animals that lead different lives, how they interact, it's just so exciting."