Why This Pakistani Bride Wore Tomato Jewellery On Her Wedding

The price of tomatoes has skyrocketed to Rs 300 per kg in several parts of Pakistan. 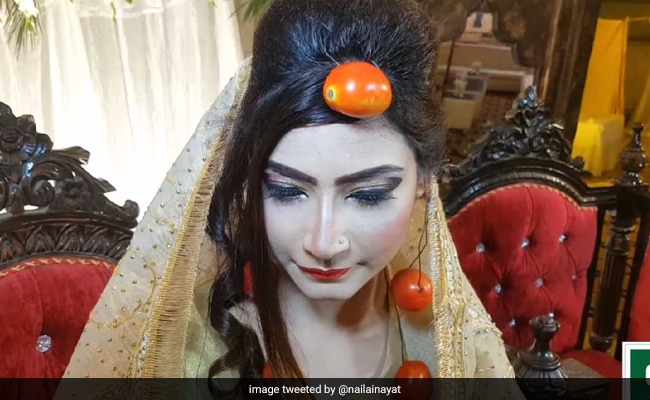 A bride in Pakistan wore tomato jewellery and the video is viral.

A video of a bride wearing tomatoes instead of gold jewellery has left many amused. The bride, from Lahore, Pakistan, is seen in a viral video wearing a golden outfit paired with a necklace, earrings, bangles and hair accessories - all made out of tomatoes. Speaking to a reporter from Daily Pakistan, she revealed the reason behind her bizarre choice of jewellery.

According to news agency PTI, the price of tomatoes has skyrocketed to Rs 300 per kg in several parts of the country.

A two-minute-and-20-second-long clip of the interview has gone viral online since it was posted on Twitter on Tuesday.  Watch the interview below:

Tomato jewellery. In case you thought you've seen everything in life.. pic.twitter.com/O9t6dds8ZO

The interview has collected over 32,000 views on Twitter, and more than 1.3 million views on Facebook. Many social media users commented on it to praise the bride's sense of humour.

Wow this is really weird and funny at the same time ☺️

Others also wondered if the video was a spoof as the reporter, Yasir Shami, is known for his satirical videos. On Facebook, some pointed out that the video looked staged, as the bride wasn't wearing henna on her hands. "Scripted... Dulhan hai par mehndi nahi lagi (Scripted, the bride is not wearing mehendi)" wrote one commenter, while another said "It's staged."

This has to be parody channel 😂😂.

This Biker In Tamil Nadu Was Stopped By A Cop. Watch What Happened Next