Why This Couple Joined A Picket Line On Their Wedding Day

"We'll show them just because it's our special day, we're not forgetting about what we're fighting for." 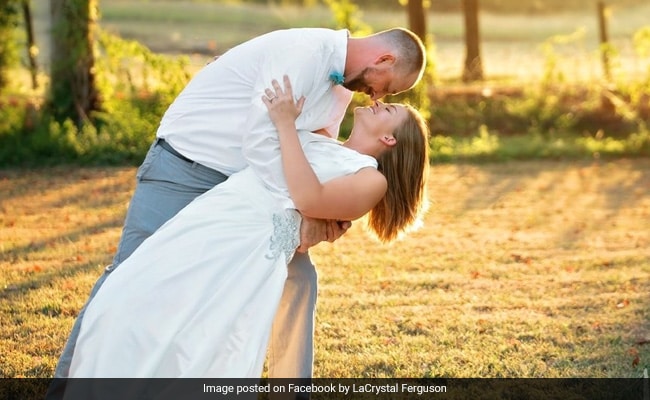 LaCrystal Robertson and Steve Ferguson joined a protest on their wedding day.

After her Sept. 21 wedding to a fellow autoworker, the new bride put down her bouquet and picked up a picket sign.

LaCrystal Robertson, 27, and Steve Ferguson, 37, were still in their formal wedding wear when they joined their fellow employees outside the north gate of the General Motors plant in Spring Hill, Tennessee, for what was then the sixth day of the United Auto Workers' nationwide strike.

After 49,000 UAW members around the country walked off the job on Sept. 16, calling for better wages, health care and other benefits, there was never a question of the couple sitting out, even for their wedding day.

"We both looked at each other and said, 'If we're still on strike, after all is said and done, we're gonna go up to the picket line and stand there in our wedding attire,'" Ferguson told The Washington Post on Friday. "We'll show them just because it's our special day, we're not forgetting about what we're fighting for."

When the couple reached the picket line around midnight, their colleagues greeted them with applause. For Ferguson, it was his second visit of the day.

It was a fitting end to the wedding day of a couple whose love story began on the manufacturing floor three years ago.

"I come from a long line of GM family," Ferguson said. "Both my grandfathers and my father worked for GM. Aunts and uncles worked for GM."

Robertson worked in general assembly, where freshly painted Acadias and Cadillacs rolled down the line. Ferguson, a team leader who was free to roam around the floor, took notice of her.

"Totally workplace romance, total luck of the draw on my part," Ferguson said.

He would try to spark conversations with his now-wife when the two were on break. Throughout the months, he noticed her penchant for dressing up for the holidays and finally asked her on a date two days before Christmas in 2016. She was dressed like an elf. Ferguson grabbed a Santa mask from a co-worker and, outside of work, asked for a kiss.

"The rest is history," Robertson said.

Ferguson proposed last Christmas, almost two years to the day from their first date, and preparations for their no-frills, rustic affair were in the works ever since.

Robertson donned a white silk gown she proudly nabbed for $30; her mother, a local restaurant owner, made the food; colleagues from UAW Local 1853 in attendance looked on as the couple shared a first dance to a country ballad.

When the strike was called a week before her wedding, Robertson told colleagues she'd be out on strike, even in her gown.

The wedding served as a reminder of what's at stake for their family in the strike.

"We didn't have a big, extravagant life but we were provided a very good life. That's what I want for all four of my children," Ferguson said. He wants his children to have the same benefits he has now, should any of them become the fourth generation of autoworkers in the family.

"I don't want them to ... have to worry about getting hired as a temp, worrying about their health care or not being paid a fair wage."

Striking workers are calling for better wages, health care, job security and a process to make temporary workers permanent hires - the latter of which has been a particular sticking point of the strike. According to the Detroit Free Press, GM's use of temporary workers was a concession the union made to help the automaker get through the lean years surrounding the 2008 recession.

GM, which brought in a profit of $8.1 billion after taxes last year, wanted workers to pay a greater share of their health care and wanted continued flexibility to use temp workers but also offered to invest more than $7 billion in new U.S. plants, add jobs and increase pay.

Despite the couple's whirlwind day, which ended well after midnight by the time they finally left the picket line, Robertson had a clear memory of what was a particular highlight for her: whipping her hair around as she and her children danced to Twisted Sister's "We're Not Gonna Take It" - a pointed message to GM executives, she confirmed.