Why Assam's Famous Golden Tiger Is Not Cause For Celebration, But Concern

"The finding of this unique individual is not a cause for celebration," wrote Kaziranga research officer and wildlife expert Rabindra Sharma. 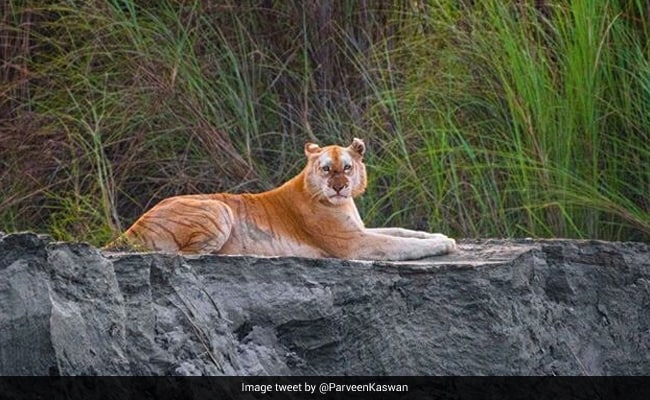 Chances are that you have already seen the now-famous photograph of the golden tiger at Assam's Kaziranga National Park and Tiger Reserve. The picture, which has gone viral on social media and left many amazed, shows a female tiger with rare golden-hued fur - which experts say is a "colour aberration caused by a unique gene."

A picture of the golden tigress was clicked by Mayuresh Hendre and shared on Twitter by Indian Forest Service officer Parveen Kaswan four days ago. It has since collected a whopping 17,000 'likes' and hundreds of amazed reactions.

Do you know in #India we have a Golden #Tiger also. Only documentation of such big cat in 21st century on planet. This by Mayuresh Hendre. Look at this beauty. pic.twitter.com/8kiOy5fZQI

But even as the rare golden tiger continues to delight social media, park experts do not see her golden colour as cause for celebration.

A report by wildlife expert and research officer Rabindra Sharma points out that the golden tigress of Kaziranga - known as Kazi 106-F - gets her colouring from recessive genes that show up due to inbreeding, which occurs due to habitat loss.

"However, the finding of this unique individual is not a cause for celebration, but an indication for us to start pondering about better connectivity among fragmented populations of tigers to prevent one of the serious problems of population decline i.e. inbreeding," Mr Sharma wrote in research which was shared by Kaziranga National Park and Tiger Reserve on Twitter Tuesday.

GOLDEN TIGER OF KAZIRANGA - A Social Media Star
She is KAZI 106-F, a rare phenomenon in wild.
“NOT ONE BUT FOUR “ such tigers with color aberration exist in Kaziranga Tiger Teserve
An article about them????@CMOfficeAssam@ParimalSuklaba1@RandeepHooda@surenmehra@ParveenKaswanpic.twitter.com/K72CthKI2s

Rabindra Sharma and Kamal Azad have pointed out that colour aberrations are not very common, and
only a few are recorded in the wild.

"The biological reason of colour aberration may be due to excessive inbreeding caused by habitat destruction and loss of connectivity," one of the experts pointed out.

The tigress has been captured on camera multiple times since 2014. In 2016, she was photographed with another tiger. But it could not be concluded whether the other tiger was her cub or mate due to the low quality of the image.

It will be very interesting to find out whether her offsprings will carry her "faulty gene", the two experts added.