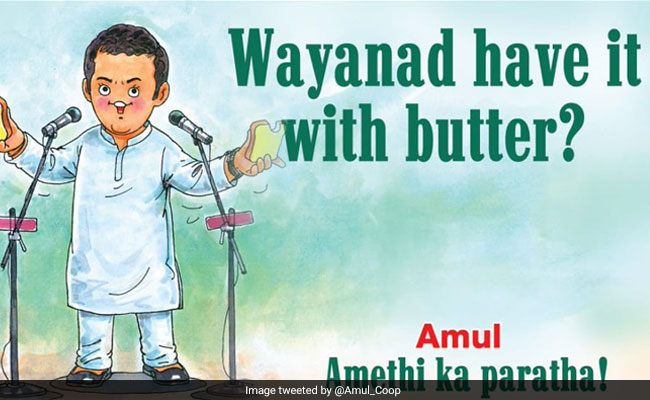 Congress president Rahul Gandhi's decision to contest the Lok Sabha 2019 elections from two seats has inspired a hilarious cartoon from Amul. On Sunday, the Congress announced that Mr Gandhi will contest from Wayanad parliamentary constituency in Kerala along with his home turf of Amethi in Uttar Pradesh. As the decision created a buzz online, Amul - famous for catchy ad campaigns - published a pun-filled poster on Tuesday that has everyone laughing.

The poster features a caricature of Mr Gandhi with a slice of buttered toast in each hand. "Wayanad have it with butter? Amethi ka paratha," it reads.

The topical cartoon has collected over 1,300 'likes' since it was posted online, along with a ton of amused comments.

I send my blessings to your team for making us utterly butterly happy :-)

The cartoon came just a day after Kerala's former chief minister and senior CPM leader VS Achuthanandan attacked Rahul Gandhi, calling him an "Amul baby". He was referring to his statement from 2011, which had inspired another funny creative from Amul.