A Twitter account named Next level Skills posted the clip with the caption, "Amazing Skills and Strength!" 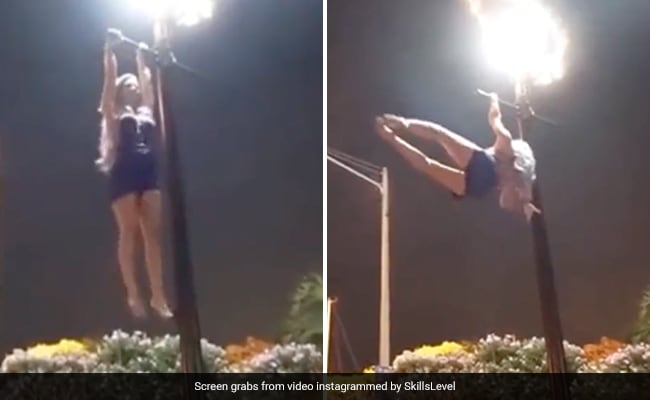 A video of a woman doing pull-ups on a street lamp post has gone viral on the internet. A Twitter account named Next level Skills posted the clip with the caption, "Amazing Skills and Strength!" The video shows a woman with coloured hair, seemingly dressed for a certain occasion, climbing a lamp post like it is an easy everyday task.

The clip starts with the woman smiling and slowly walking towards the lamp post. She is then seen removing her high heels and gracefully climbing the pole. As soon as she reaches the top, the woman then performs some incredible stunts.

The woman uses the end of the post as a pull-up bar and effortlessly performs 10 or more pull-ups. Moments later, she then turns around and elegantly does a gymnastic trick. After completing the stunt, she climbs down again in a graceful move with a smile on her face.

The video has left the internet amazed. Since being shared, it has garnered nearly 900,000 views and more than 25,000 likes.

One user wrote, "Woww...she is amazing." Another added, "When this is your casual flex while out on the town, you're a rock star."

A third said, "Wow. That's some serious strength. Impressive," while a fourth commented, "Omg the strength one needs to do this is amazing".

Meanwhile, speaking of stunts, a while back a young boy had left the internet amazed with his acrobatics skills. Shared by industrialist Anand Mahindra, the video featured a boy skillfully performing acrobatics on a road in Tamil Nadu. The little kid performed multiple stunts including front and back flips. He even pulled off a 360-flip as onlookers watched in awe.