"When we came across this huge python on the middle of the road which looked like a speed breaker, tiger was confused about what to do." 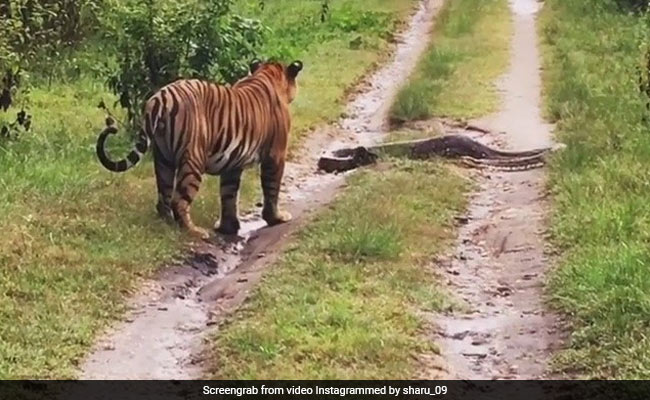 A tiger comes across a python in Karnataka.

An old video that is going viral on social media again shows a tiger coming across a huge python on a road in Karnataka. The video was filmed in August 2018, but has captured social media's attention again after it was shared on Twitter this morning by Indian Forest Service officer Susanta Nanda.

The clip was recorded by Sharath Abraham, a naturalist at Evolve Back Resorts Kabini. According to him, the close encounter between the snake and the big cat was recorded on August 31, 2018, at Nagarhole National Park And Tiger Reserve.

"I was with Kabini river lodge driver Feroz when I saw this male tiger marking his territory," Mr Abraham wrote on Instagram, adding that they followed the tiger for around 15 minutes, after which they came across the python on the road. "When we came across this huge python on the middle of the road which looked like a speed breaker, tiger was confused about what to do," he said.

The video shows the big cat carefully walking around the snake and looking at it curiously. Then the tiger retreated into some bushes by the side of the road. "Tiger tried to investigate the snake by hiding behind the small bush but the python with its full belly started to approach the tiger," Mr Abraham said, sharing the conclusion to the encounter in a second video, which shows the big cat walking away after losing interest in the snake.

"Tiger leaves the way to python," wrote IFS Susanta Nanda while sharing the clip on Twitter.

The clip has collected over 12,000 views and several comments on the microblogging platform.

Even the tiger knows the ferocity of the python

Tiger is wise. Avoided undue risk in attacking python when many harmless animals are available to satisfy hunger