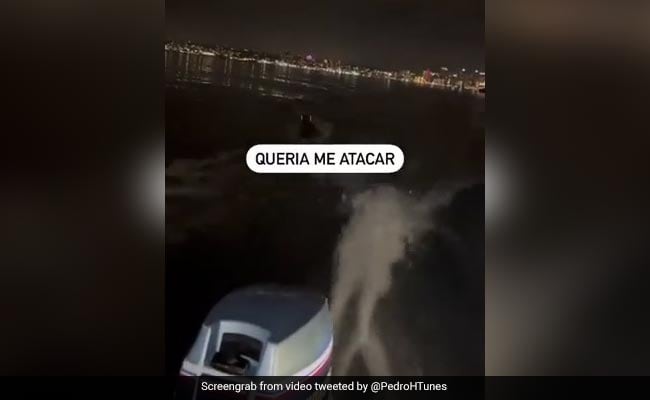 Being at sea at night is an exhilarating and soothing experience in many ways. But it can also be very dangerous. Recently, a fisherman, who had gone out to sea off the coast in southern Brazil, had a terrifying moment when he was chased by a creature with glowing eyes. The unidentified creature repeatedly leapt from the water just behind the speeding boat in what looks like a bid to hunt the fisherman down. The two remained in a tight race as the creature came dangerously close to the fisherman. Luckily for him, he managed to win the race, and the creature receded in the water.

A video of the chase has emerged on social media. It was captured by the boatman but his identity remains undisclosed.

The 47-second-long clip shows the mysterious creature repeatedly leapfrogging out of the water and then going down again. Only its two eyes glow at the camera in the dark against a shadow. The tense moments are chilling. At one point, the creature appears to be catching up with the boatman.

A video had a caption in Portuguese. When translated, it meant, “Mysterious creature chased a boat yesterday in Rio Grande do Sul.” The video also had a caption embedded into it — “queria me atacar”, which meant “wanted to attack me” in English.

The Daily Star, too, reported that the incident occurred off the coast of Rio Grande do Sul, the southernmost state of Brazil. Many initially suspected that the animal could be a dolphin but its menacing speed made them change their minds.

The user also shared a thread to find out what the monster was. One of the tweets in the thread stated the mysterious creature could be a harmless seal (pinniped).

In another tweet, the user wrote, that pinnipeds were curious by nature and often followed boats, especially at night. They are extremely fast animals, swimming at speeds over 40 km/h.

Another thread stated that the strange sea creature was actually a pinniped — a seal or a sea lion — and went on to add that many species of these animals frequented the area, some with scary sizes and appearances. The tweet also added that the species in the video could be a leopard seal, which that grows up to almost 4 metres.

As far as the glowing eyes was concerned, the user stated that the glow came from a structure known as Tapetum lucidum, a membrane inside the eye present in nocturnal animals.

Given the boatman's experience, it appears wise to not go at sea at night or alone, despite its beauty and vastness.