Watch: A Girl's Excited Reaction After Seeing Pilot Dad On The Same Flight 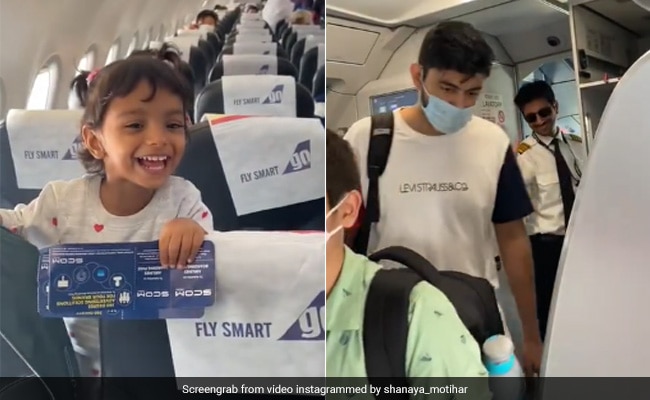 Shanaya Motihar was all smiles after seeing her father as the pilot of her flight to Delhi.

A little girl got a sweet surprise after boarding her GoAir flight to Delhi recently and her reaction was captured in an adorable video that's going viral online. The viral video doing the rounds of the internet shows a girl named Shanaya Motihar excitedly greeting her father when she realises he is the pilot of her flight. In the video, we see Shanaya calling out “papa” to her father, who stands at the cockpit doorway.

The father smiles and waves back at her while other passengers board the flight. The video was shared on Shanaya's Instagram page, which is managed by her mother.

The caption read, "My first flight with papa... He flew me to Delhi. I was very excited to see him… it was my best flight till now. Love you, Papa."

The video has received over 1.4 lakh likes and has been viewed over 1.2 million times on Instagram since being posted last week.

One of them wrote, "This is so adorable."

Another user commented, "I can see the proud papa bears big grin from ear to ear. Probably his best flight too."

A third user wrote, "Omg I love this princess she is so much cute."

Many other users left red heart emojis in the comments section.

While Shanaya's story brought a smile to our faces, other stories may startle some of us. Earlier this year, in April, when an airplane made an emergency landing in the ocean in Florida, beachgoers stood stunned by this unusual sight. A video shows the plane landing on the shallow waters for a soft landing. Nobody was harmed during the landing. Instead, people praised the pilot for the “decent emergency landing”.

In some bizarre instances, influencers try to fake it on their flight trips. One such influencer and Instagram model posed in the business class section of an airplane. Everything was fine until another passenger caught her sitting in an economy class seat of the flight. The photo shared by the passenger led to criticism against the model.