A hilarious video shows Stanley the giraffe trying to steal a groom's turban. 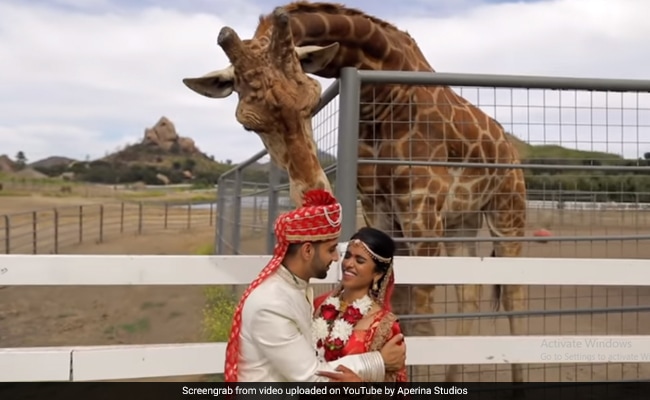 Stanley the giraffe tried to steal a groom's turban at a wedding in Saddlerock Ranch.

Stanley the giraffe was recently filmed trying to steal a groom's turban right off his head – twice. He was probably just hungry. The hilarious video, which is being widely shared online, shows the giraffe photobombing the wedding photoshoot of Amish and Megna. The couple recently got married at the Saddlerock Ranch in Malibu, California - home to animals like zebras, horses and, of course, Stanley the giraffe.

After the ceremony, as the newlyweds posed for photographs under the giraffe's enclosure, Stanley decided to join the celebrations by chomping down on the groom's red turban. Hilarious footage of the incident shows him leaning down and yanking the turban off Amish's head. He was almost successful in his heist too - managing to grab the turban even as Megna tried to hold it down – until someone intervened and saved the accessory from becoming Stanley's meal.

Since being shared online, the video has collected over 10,000 views on YouTube. "Well, a perfect photoshoot after all" wrote one person in the comments section, while another said: "This is gold."

This is not the first time a wedding photoshoot has left social media users amused. Last year, when a couple's dreamy beach photoshoot did not turn out the way they had expected – the Internet still praised the results.