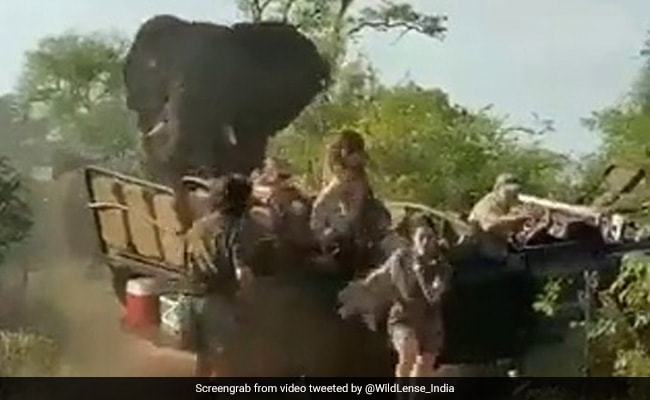 A bull elephant was filmed charging at a safari vehicle in South Africa.

Terrifying footage shows the moment an elephant charged at a safari vehicle in South Africa's Selati Game Reserve and sent its occupants running for their lives. Trainee guides were being driven through the game reserve, which is situated at the edge of Kruger National Park, on Sunday when the bull elephant appeared out of the undergrowth and made straight for their vehicle, reports Daily Mail.

Footage captured by EcoTraining guides reveals how the 13-foot elephant flipped the jeep over. "Get out, get out, get out," a guide in a safari vehicle behind the jeep being attacked was heard yelling as trainee guides ran away from the aggressive elephant.

The hair-raising footage has gone viral on social media, racking up thousands of views on Twitter and Facebook. Watch it below:

EcoTraining said in a statement that its instructors and trainees came across a breeding herd of elephants during a routine tour on Sunday. The bull elephant was in musth - a state of sexual aggression that occurs during mating season in male elephants. Elephants in musth are known to become extremely aggressive and violent towards humans and other elephants.

"An elephant bull, who was with the breeding herd, mock charged the vehicle. The elephant bull mock charged again, when they moved forward slowly, and then made contact with the game drive vehicle and displaced it off the road," EcoTraining said.

Luckily, everyone in the safari vehicle managed to escape without injuries.

"Although the vehicle was damaged, thankfully none of the people on the vehicle were injured," said the General Manager of Selati Game Reserve, Bryan Havemann.

All people involved in the incident received professional counselling afterwards.

Want To Stay At The Iconic 'Home Alone' House? Here's How You Can