Titled 'Mermaid in Disaster', they show Aditi Singh in a red dress on the flooded streets of Patna 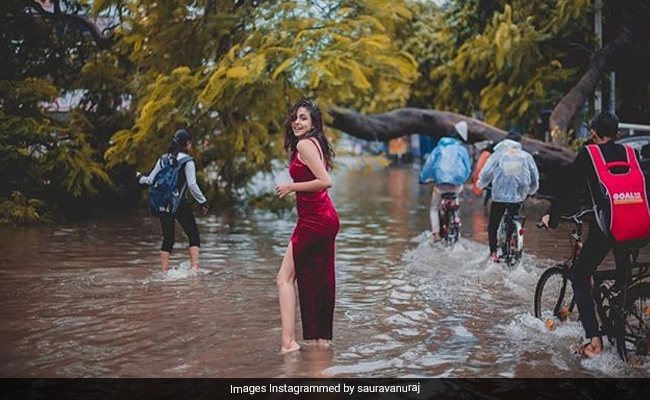 A woman's photoshoot in the middle of Patna floods has met with criticism.

Three days of heavy rain have flooded homes and hospitals in the capital of Bihar, Patna. The city was brought to a standstill over the weekend after many areas submerged in chest-deep water. Three teams of the National Disaster Response Force have been deployed in Patna, where schools will remain shut till Tuesday.

In the midst of this, a woman's photoshoot on flooded Patna roads has divided opinions on social media.

Photographs of Aditi Singh, a student of the National Institute of Fashion Technology (NIFT), posing on the waterlogged streets of Patna have gone viral online. The photos were shared on Instagram and Facebook by photographer Saurabh Anuraj.

Titled 'Mermaid in Disaster', they show Aditi Singh in a red dress, smiling as she is photographed in the flooded streets of Patna.

Mr Anuraj, while sharing the photographs on Saturday, said that they only wanted to show the condition of the city.

The photoshoot has collected over 10,000 'likes' on Instagram, collecting mixed responses.

While some have praised Aditi Singh and Saurabh Anuraj for trying to show the situation in Patna, others have criticised them for romanticising the floods to their own advantage.

"After you're done with the photoshoot, do find some time to help those in need," wrote one commenter on Instagram. "You cannot romanticise or glorify a natural calamity," said another.

Others defended the photoshoot.

"Love the concept," wrote one person. "Why is everyone agitated on seeing this photo? Don't critise on blind sentiments," another asked.

Let us know what you think of the photoshoot using the comments section.