Viral Video: The YouTuber Who Spent 50 Hours Buried Alive In A Coffin

Over 5 crore views for MrBeast's video - and counting. 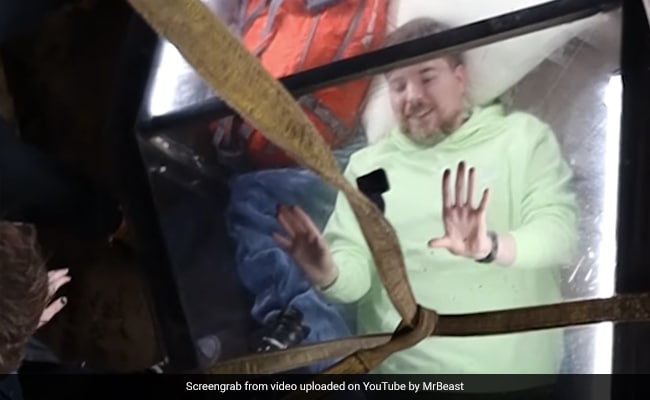 A YouTuber spent 50 hours underground, sealed inside a glass coffin.

Popular YouTuber MrBeast spent 50 hours sealed inside a coffin and buried underground in a jaw-dropping stunt. While the thought of being buried alive is enough to send shivers down the spines of most people, MrBeast - real name Jimmy Donaldson - spent more than two days in a box underground to entertain his 57.5 million YouTube subscribers.

In the clip, which MrBeast shared on his YouTube channel, he can be seen lying inside a coffin and using a handheld device to talk to his friends outside. "I wanna move around, but I can't," he cries at one point as a camera installed inside records his limited movements.

Inside the coffin, MrBeast had a blanket, some food and a pillow, among other essential supplies.

"This was the most insane thing I've ever done," he wrote while sharing the video on YouTube this Sunday.

Since being posted online, the video has racked up a staggering 5 crore views and more than 1.8 lakh comments.

"It's crazy on how much he puts into his videos just to entertain us. Also this dude is amazing," wrote one person in the comments section.

"This guy has given millions of dollars to charity, travelled around the world, spent 24 hours in a literal doomsday bunker, ate a 70 grand pizza and now he's me telling that picking up his camera with his toes is the coolest thing he has ever done," another remarked.

MrBeast is hugely popular for his outlandish videos on YouTube. It was the viral fame of his video "I COUNTED TO 100000!" in 2017 that gave rise to his unlikely success story. According to a Bloomberg report, in 2019, every video he posted eclipsed 20 million views. Such consistency is unparalleled, even among YouTube's biggest stars. "He lives on a different planet than the rest of the YouTube world," said Casey Neistat, a filmmaker turned YouTuber.