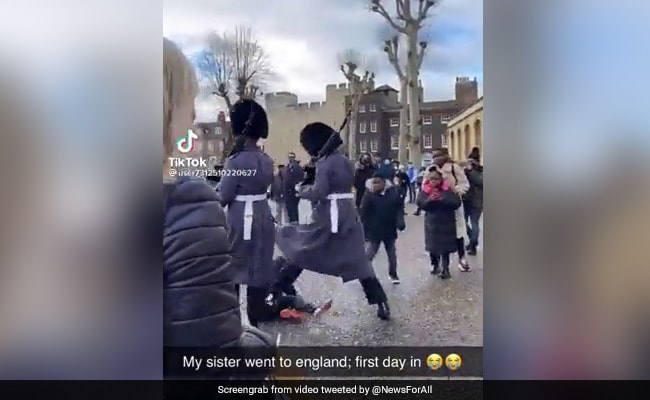 A member of the Queen's Guard was filmed knocking a child over.

Shocking footage shows the moment a member of the Queen's Guard knocked over a boy while marching. In the viral video, two royal guards were seen marching at the Tower of London in the UK, reports The Sun. Dressed in grey uniforms with signature bearskin caps, they were filmed knocking over a child who came in their way.

"Make way," someone was heard shouting before one of the guards collided with the young boy, shocking onlookers. People were heard gasping as the boy fell down. The marching guards were seen stepping over the boy, who immediately got back up on his feet, apparently unhurt.

The video was first shared anonymously on TikTok, from where it made its way to other social media platforms. On Twitter, it has been viewed more than 2 million times.

The video has polarised opinion on social media, with people divided over who was to blame for the accident.

Why weren't the parents keeping an eye on them? It's common knowledge that they're actual soldiers and keep to specific routes that shouldn't be blocked

I did that job once. The soldier didn't hurt him on purpose, but they are on guard and move for absolutely no one, unless ordered to do so.

If you actually slow the video down the boy was trying to move out of the way the guard was just to close while marching before contact was made pushing the boy over and inevitably cause the boy to be trampled on, however the guards should have avoided protocols to check the boy!

Why can't we change the rules so that the guards can just walk around people? I'm sure the answer is “tradition” but who really cares

A spokesperson for the Ministry of Defence told Daily Mail that they were aware of the video and the guard did in fact check on the boy later.

'We are aware of an incident at the Tower of London earlier today during a routine patrol," the Ministry of Defence said in a statement.

"The Guardsmen on duty warned members of the public that a patrol was approaching but the child unfortunately ran out in front of the soldier unexpectedly.

The Queen's Guard is the contingent charged with guarding the royal residences in the United Kingdom.