Viral: Video Of Rabbit Playing With Bedsheet, Internet Is All Hearts

Many users related to the rabbit's mood of just going to bed. 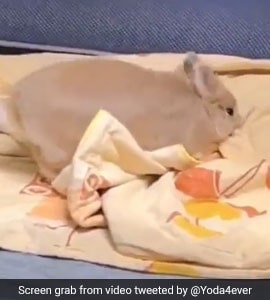 Animal videos are some of the most engaging and fascinating on social media. And now one such hilarious video of a rabbit playing with a bedsheet has gone viral on social media. What's more interesting is that the rabbit is trying to arrange the sheet only to use it as a blanket for sleeping.

In the seven-second clip, the little rabbit is seen jumping and holding a bedsheet in his mouth on a blue-coloured sofa. Towards the end of the clip, the animal holds the sheet and puts it over its body, seeming like it is ready to doze off.

The video was shared on Twitter by Yog, an account which often shares funny animal videos. It was shared on November 20 and since then, the short clip has amassed over 2.8 million views and 1.5 lakh likes on the microblogging site. "Mood..." reads the caption of the video.  Many users related to the rabbit's mood of just going to bed.

A second commented, "On this fine Monday this is what i need."

"This bun bun has the right idea! I want to crash on the couch with a blanket over my head!" said a third person.

"So much work to tuck myself in!" added an internet user.

"This rabbit has better control over blankets, my blanket seems to have legs," commented another person.