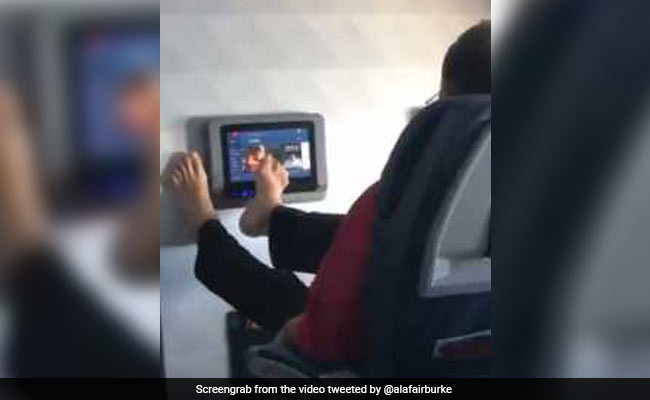 Alafair Burke shared a video of a man using his feet on an in-flight screen.

A video currently going viral has horrified netizens. Shared by crime novelist Alafair Burke, the footage, taken during a flight, shows a man using his feet to swipe through in-flight entertainment options. The clip was shot by Ms Burke's friend during a recent flight, according to her tweet.

"My friend who doesn't have twitter sent this from her flight," she wrote. "It belongs on Twitter."

The video shows a man using his toes to scroll through the viewing options on a mounted screen. Watch it below:

Since it was shared online on Monday, the video has gone viral with over 9 million views. It has also led to a lot of criticism on social media.

"This is the most disturbing thing I've seen on Twitter," wrote one person on the microblogging website. "Next time someone stares at me for wiping down everything at my seat, I'm going to show them this video," said another.

Other people TOUCH this screen.

After some Twitter users suggested that the passenger could be differently-abled and unable to reach the screen, Ms Burke confirmed that wasn't the case.

"The photographer confirms that she saw him walk on and off the plane, carrying his own bag. He just likes to watch TV with his bare feet," she wrote.

The photographer confirms that she saw him walk on and off the plane, carrying his own bag. He just likes to watch TV with his bare feet.