"UFOs are known to hide in ocean waters and in clouds," wrote one conspiracy theorist 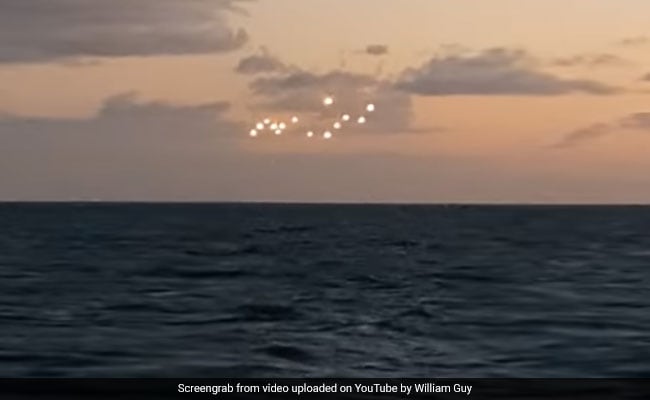 According to WYFF, Mr Guy captured the mysterious cluster of lights while aboard a ferry in the Pamlico Sound lagoon.

"Anybody tell me what that is?" Mr Guy is heard saying in the video as the camera pans towards the mysterious lights. "We're in the middle of the ocean, on a ferry, nothing around. Look. Nothing around. No land, no nothing."

The video has been viewed over 4.8 lakh times since it was shared online. It has also led to a number of theories about what the lights could be.

"Could it be a cluster of Chinese lanterns all launched at the same time?" asked one person in the comments section. "UFOs are known to hide in ocean waters and in clouds," another wrote. "Just some rocket  parachute flares," a third suggested, while a fourth added: "The lights are staying too perfectly distanced from each other to be balloons just floating around."

One commenter, Derrick Chennault, identified himself as a former Marine and wrote: I am pretty sure I know what those lights are. As a former Marine based at the 2nd Marine Air Wing in Cherry Point... we used to regularly drop flares out of the back of our plane in the evenings for military exercises. They are one million candle power each so they were pretty bright and can be seen from far away and floated down slow as they hung from a parachute.... Glad to see the Marines are still spooking people."

What do you think the lights are? Let us know using the comments section.