Even though in the video the little boy seems to enjoy the dangerous stunts, internet users slammed the father for pulling such a reckless feat. 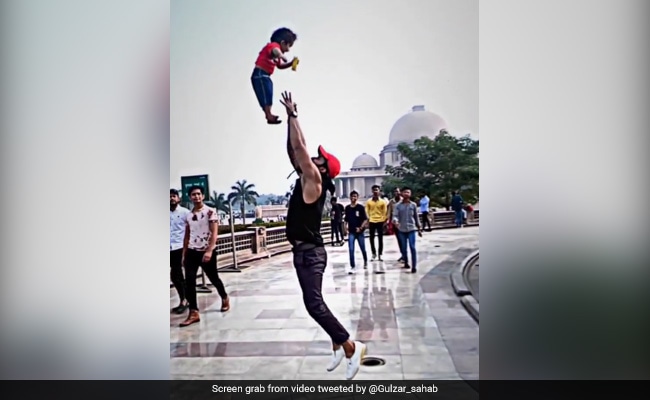 A video showing a father throwing his little son high up in the air, making it look like the child is floating in the sky, has surfaced on social media and left netizens infuriated. The 32-second footage was shared on Twitter by a user named Gulzar Sahab on Wednesday, and since then it has accumulated more than 378,000 views and nearly 7,000 likes.

In the video, the man is seen doing extreme acrobats by throwing his kid high up in the air and then grabbing him in his arms. The father is also seen making the child stand on his palm and swiftly dropping him down with ease.

At first, the man throws the child high up in the air and then catches him in his arms. However, moments later, he then lifts the kid with one hand, loses his grip on the child intentionally and lets him hang upside-down, before swinging him in that position for a while. The father did not stop here as at the end of the video he again tosses his son at a menacing height and swirls him in the air like a twister.

Even though in the video the little boy seems to enjoy the dangerous stunts, internet users slammed the father for pulling such a reckless feat. In the comment section of the post, while one user wrote, "this person should be jailed," another simply said, "This is too much... doin' all this just for the sake of videos... it's dangerous".

One user commented, "If my guy ever does this to my kid I'm never gonna let him hold the kid." Another wrote, "Seriously..for all this nonsense he's risking his kid."

A third user said, "Senseless papa (father)". A fourth wrote, "How much ever perfect you may be but shouldn't try this. End of the day we are human beings make mistakes."

However, some users also opined that the child looks happy with all the playing and that the man has practised well. "He made the child smile. Others have the right to mind their own business!!" wrote one user. "Well, don't judge by your thought... For that they have practised how many hours please tell that as well.." said another.