The video left internet users stunned. While some users called the man "superman," others called him the "real Bahubali". 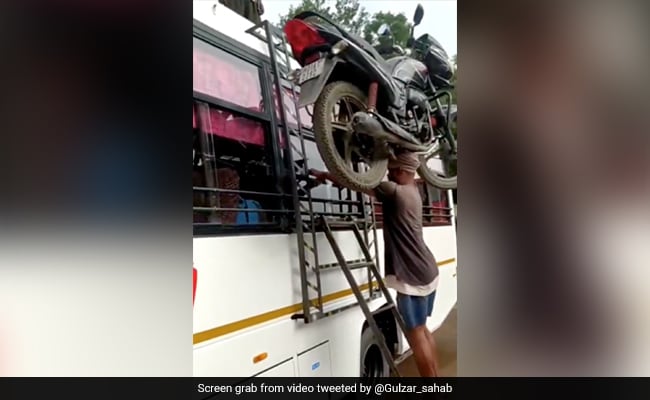 A video of a man carrying a heavy motorbike on his head while climbing up on a bus to place it on the carrier is gaining traction on social media. The clip was shared on Twitter on Friday by a user named 'Gulzar Sahab', and since then it accumulated more than 76,000 views and over 5,000 likes.

"They are really super human," the caption of the post read.

In the video, a man is seen walking towards a bus with a heavy motorcycle over his head. Seconds later, he is seen taking his steps along a fragile ladder placed on the side of the bus and going straight to its top in order to place the two-wheeler on the carrier.

The man climbed the steps carefully one by one while balancing the heavy vehicle on his head. In the end, he successfully reached the top and placed the motorbike on the roof of the bus.

Since being shared, the video left internet users stunned. "I literally need that neck strength," wrote one user. "The real BAHUBALI," said another.

A third called the man "superman," while a fourth commented, "Wow great strength". One user also wrote, "Even captain America would be not do like this." Another pointed out, "This is not heroic... it's sheer need to earn to feed their family. They risk injury so they can eat that day... they are exploited."

Meanwhile, speaking of incredible strength, a while back a video of a 56-year-old woman lifting heavy weights and using other gym equipment had taken the internet by storm. The clip was shared on Instagram jointly by Humans of Madras and Madra Barbell.

In the video, the woman was seen lifting heavy weights and dumbbells and various other gym machines and equipment, all of it while wearing a saree. The post garnered over 1.1 million views and over 70,000 likes. Internet was simply left awestruck looking at her inspiring journey.