A video going viral on social media shows a lovely example of a dog and a 90-year-old man's friendship. 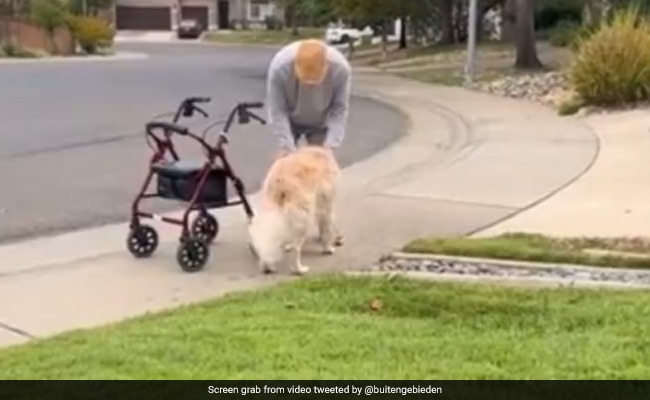 Friendship is not limited by age, gender, caste, religion, or even species. It's a lovely bond that is shared by two living beings' emotions; love and care. One video going viral on social media shows a lovely example of a dog and a 90-year-old man's friendship.

Every morning 11 year old dog Maisy is waiting for her 90 year old friend Richard during his daily walk.. 😊

Every morning, an 11-year-old golden retriever named Maisy waits for its 90-year-old friend Richard, and after that, both of them start to take a stroll.

Shared by a user named Buitengebieden on Twitter on Tuesday, the caption reads, "Every morning, 11-year-old dog Maisy waits for her 90-year-old friend Richard during his daily walk." The video has been credited to a user named mspeelhmb.

A dog is seen waiting for someone at the beginning of the video footage. An elderly man with a walker can be seen approaching the dog while waving his hand. The dog suddenly gets up and starts to wag his tail. The dog approaches the old guy and continues to wave its tail while it does so. The old guy is seen gently patting the dog.

The video has amassed over 3.1 million views and more than 2.1 lakh likes in just one day. More than 16,000 users have retweeted the post so far. Numerous users have given heartfelt remarks in the comment section of the post.

One user wrote, "Me too! What a difference it makes to your mood to see that gorgeous waggy tail."

"I think it's safe to say that we all want to live in this sort of community," commented another.

"The brevity of life makes things like this all the more sacred and beautiful," wrote a third user while sharing the post.