A video of a baby monkey that got separated from its family was recently sent back and the video of the reunion is now viral. 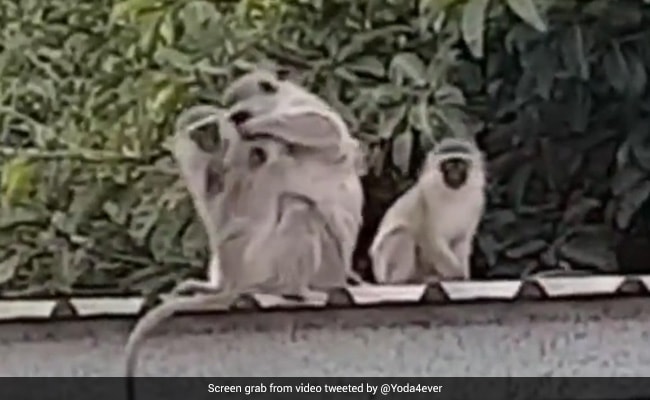 Monkeys are a large and perhaps the most diverse group of mammals that display human-like behaviour.

A video of a baby monkey that got separated from its family was recently sent back and the video of the reunion is now viral. The baby monkey was taken by wildlife experts for rehabilitation and they decided to send it back to its parents.

The emotional reunion is becoming famous on social media, with the baby monkey's parents even giving their little one a hug. The video has been posted on Twitter by Yoda.

Rehabilitated wild monkey gets a huge hug from family when released..???????? pic.twitter.com/khoTJBB6Sr

“Junior, I was looking for you everywhere! I called all the hospitals in the area...Oh, thank goodness! Mom, I was locked up all night! I swear mom, I didn't do anything! I missed you so much!” a user who goes by the name Mr Paul posted on Twitter.

“The way it grabbed him and hugged him,” tweeted another user Azul along with crying emojis.

Monkeys are a large and perhaps the most diverse group of mammals that display human-like behaviour. There are a variety of monkeys, spread across the world, with very different lifestyles, according to Live Science. They come in many shapes, sizes and colours, but they are all intelligent and social creatures.

Earlier this week, another video went viral on social media, which showed a monkey visiting a clinic in Bihar's Sasaram to get its wounds treated.

The monkey was seen waiting patiently along with its baby and that's what caught the attention of social media users.

The monkey entered Dr S M Ahmed's Medico Clinic in Sasaram's Shahjama locality around noon and sat on the patient's bed. The monkey's face was scarred.

The doctor gave her a shot of Tetanus and applied ointment on her face. The monkey rested patiently on the bed through the entire process.