Read inOther Languages
This Article is From Oct 06, 2020

Egypt's Ministry of Tourism and Antiquities said in a statement that 59 wooden coffins were discovered inside burial wells in Saqqara's archaeology area. 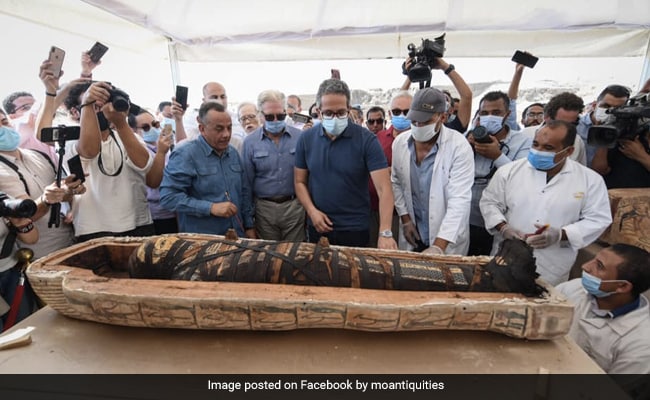 A mummy inside an ancient Egyptian coffin, sealed 2,500 years ago.

Archaeologists in Egypt have opened an ancient mummy coffin in front of a live audience. On Saturday, dozens of people watched and filmed as archaeologists unsealed the first of 59 sealed sarcophagi found earlier this year in Saqqara, revealing a mummy inside, reports Global News.

Saqqara is a vast, ancient burial ground in Egypt which served as the necropolis of the ancient city of Memphis. Egypt's Ministry of Tourism and Antiquities said in a statement that 59 wooden coffins were discovered inside burial wells in Saqqara's archaeology area. The wood coffins are in good condition and contain the bodies of Egyptian priests, prestigious members of the community and other senior men.

On Saturday, one of the coffins was opened for the first time since it was sealed some 2,500 years ago. A video of the unsealing, hosted by the Ministry of Tourism and Antiquities, has now gone viral on social media. It shows a mummy inside the coffin, wrapped in an ornate burial cloth. Watch it below:

The mummy tomb, which has been sealed for 2500 years, has been opened for the first time. pic.twitter.com/KWGT95girv

The video has garnered a whopping 9 million views on Twitter. Many on the microblogging platform joked that opening a millenia-old coffin may not be the best course of action in the year 2020. Pop culture and folklore have perpetuated the belief that opening a mummy's tomb leads to death and curses, according to the National Geographic.

"I've always wondered when opening something like this if it could contain viruses or germs that maybe modern humans have no immunity to," one Twitter user wrote. "You couldn't have waited a couple more months? This ain't the year," another said.

Honoured to be invited by the Minister of Tourism and Antiquities HE Khaled El Anany to Saqqara for the announcement that a new tomb of mummies has been discovered. I saw one being opened for the first time in 2600 years! Truly amazing! @TourismandAntiq@MFATNZ ???????????????? pic.twitter.com/5oLfAM7zAV

According to a press release by Egypt's Ministry of Tourism and Antiquities, initially three wells with 13 coffins were discovered in Saqqara, then another 14 coffins were revealed, bringing the total number of coffins discovered to date to 59 coffins.

The coffins will be transferred to the new Grand Egyptian Museum in Giza for display.