Viral: In Long Struggle To Adopt A Boy, He Exposed Orphanage Malpractices

"The day Avnish came home, it was like sunshine walked into my life," says Aditya Tiwari 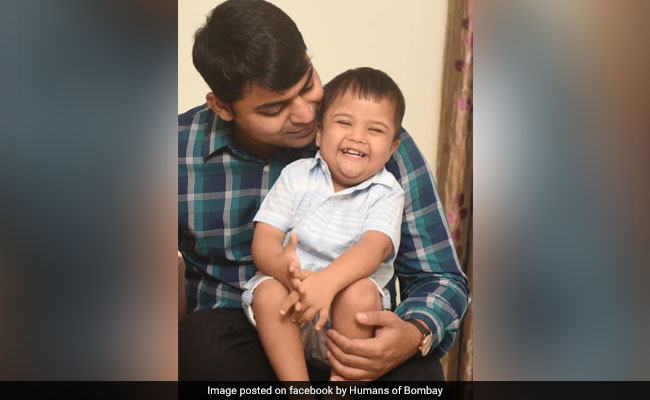 Aditya Tiwari with his son, Avnish.

A heartfelt post shared on the popular Facebook page 'Humans of Bombay' has gone massively viral online. The post tells the story of Aditya Tiwari, an Indore man who, in 2016, became the youngest single man in India to adopt a child. It details his long struggle and what motivated him to keep going in his attempts to adopt Avnish - a boy with Down Syndrome.

"About 5 years back, when it was my father's birthday, I went to an orphanage to distribute sweets...that's when I saw Avnish for the first time," Mr Tiwari tells 'Humans of Bombay'.

At that time, Avnish was five-months-old and lying in a corner with nobody paying attention to him.

"I couldn't help myself, so I went and picked him up - he laughed, and we just clicked," says Mr Tiwari, describing the moment that would lead to a long struggle in which he exposed orphanage malpractices before ultimately succeeding in adopting Avnish.

"I asked the warden what was going to happen to these kids, he said that all but Avnish would get adopted because Avnish was 'paagal', had Down Syndrome and was going to die in a few years anyway," says Mr Tiwari.

In his post, Mr Tiwari speaks about asking the orphanage if he could adopt Avnish, but being told that "a bachelor, younger than 30 had no right to adopt."

Not to be deterred, he kept visiting the orphanage and asking about Avnish's medical condition to make sure he was being treated right. "But every time I asked, the warden was dodgy."

Mr Tiwari recalls that the orphanage even shifted Avnish to Bhopal after becoming tired of his relentless "snooping" - which only made his determination stronger. As he drove down on weekends to meet Avnish and wrote letters to ministers and public figures to change adoption laws in India, he also began to suspect that all was not right with the orphanage.

"I realised that there were many more undocumented kids at the orphanage. Something was fishy - a lot of these kids were disappearing and I suspected they were victims of child trafficking and organ selling," he says in his post.

He decided to go to the police and file petitions to bring out the truth - but began to receive threatening calls. This continued until the day the Welfare Minister responded to one of his many petitions and letters and said that she would help him.

"That expedited everything, and soon that orphanage was exposed and banned," says Mr Tiwari.

Eleven months after that, Mr Tiwari was given custody of Avnish, a moment that he describes as the "happiest moment" of his life.

"The day Avnish came home, it was like sunshine walked into my life," he says. Read his full post below:

Since being shared online on Monday, the post has collected over 10,000 comments and over one lakh reactions. It seems to have touched thousands, many of whom have flooded the comments section with appreciative comments.

"This is one of the most profound stories I've come across on this page. Hats off to this gentleman's love and perseverance," wrote one person. "This is sooo beautiful that no words can express the sense of compassion and love," said another, while a third wrote: "What a beautiful soul you are!!! bless you for what you have done!"

Let us know what you think of Aditya Tiwari's story using the comments section.