1.8 million views for the video - and counting 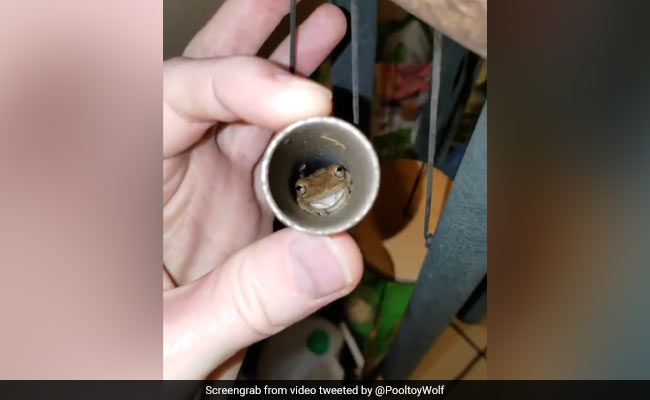 A video of frogs hiding in wind chimes has gone viral online.

Millions of residents have been evacuated inland as Hurricane Dorian moves towards the US coast. The severe storm has unleashed massive flooding and destruction in the Bahamas, and the states of Florida, Georgia and the Carolinas are expected to be affected by it.

As residents of Florida prepare for the looming storm, one man found a group of frogs taking refuge in his wind chimes ahead of Hurricane Dorian's arrival.

Patrick Smith, 30, a resident of Belle Isle, told Newsweek that he found the frogs on Monday afternoon as he "went to hang the chimes in the laundry room." On noticing that they sounded "a bit dull", he checked them and found frogs inside each of the chimes.

Mr Smith said that tree frogs, like the ones he found, "like to sleep during the day in dark, secluded places." However, he believed that the ones inside the wind chimes were taking shelter from the approaching storm.

The video, shared on Twitter on Tuesday, has gone viral with over 1.8 million views. It has also collected a number of comments, with some expressing worry about the frogs. Take a look at it below:

So I went to put away my wind chimes for #HurricaneDorian, and...

"Also for those asking, all the froggies are safe and accounted for! They found spots to hide deep inside the leafy palm fronds behind our backyard pond!" Mr Smith added on the microblogging website.

Take a look at how people reacted to his video:

Protect them, for they will be your friends in the coming storm.

Thank you for making sure the frogs were safe. 🐸🐸🐸🐸🐸

Mine have their babies in the chimes downstairs. Been bringing the family for over 20 years. They get in the downpipe & sing at night . Love seeing the new babies.
Feel Blesse🐸🐸🐸

Mine have their babies in the chimes downstairs. Been bringing the family for over 20 years. They get in the downpipe & sing at night . Love seeing the new babies.
Feel Blesse🐸🐸🐸

Weather Channel reports that Hurricane Dorian's rain, wind and storm surge are lashing the Carolinas. A tropical storm watch has now been issued for parts of Massachusetts.