The trout was released back into the lake 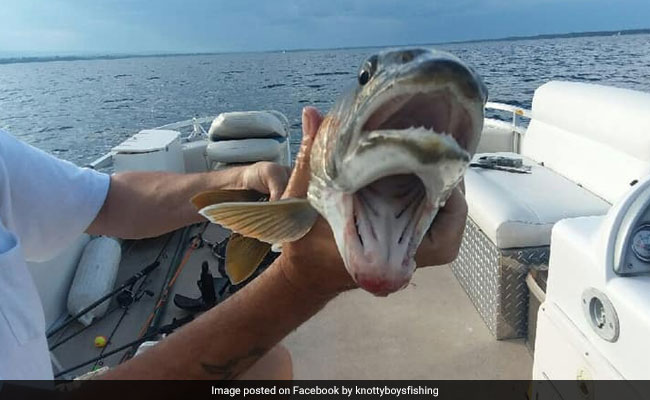 A photo of the fish with two mouths has gone viral online.

A woman fishing in upstate New York made a one-of-a-kind catch when she reeled in a fish with two mouths. Debbie Geddes caught the strange-looking fish while she was out on Lake Champlain with her husband on Friday, reports NBC News.

"When we got it in the boat I couldn't believe what I was seeing! Two mouths! And yet this fish was healthy and thriving! Pretty amazing!" she said.

A photo of the fish was posted to Facebook by Knotty Boys Fishing, a fishing team that competes in local bass tournaments, and it has been widely shared around the world.

"Two headed Lake Trout caught by a co-worker Debbie Geddes a few days ago on Lake Champlain," wrote Knotty Boys Fishing while sharing the picture on Monday. Take a look at it below:

Since being shared online, the photo of the fish with two mouths has collected more than 6,000 'shares' and over a thousand comments. It has also sparked multiple theories about the creature.

"Speaking as a biologist, I think it is a deformity. Something went awry embryologically," wrote one person in the comments section. "It's not a two headed trout...it's an old injury! Most likely from improper handling/release," another theorised. "Champy's offspring?" a third wondered, referring to a mythical monster believed to live in Lake Champlain.