Wallaby, Spooked By A Dog, Falls Into Sydney Harbour. Watch The Rescue

It was rescued by workers of a ferry passing by 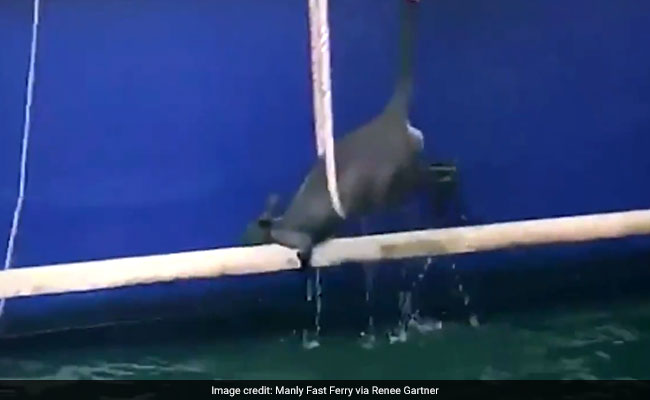 Sydney: A swimming wallaby has been plucked from Sydney harbour by a passing ferry after the spooked animal was apparently chased out of its bushland home by a dog.

Ferries in the beachside suburb of Manly came to a temporary halt late Thursday as crew members aboard one vessel threw a rope around the distressed marsupial and slowly hauled it out of the water.

The wallaby -- which resembles a smaller version of a kangaroo -- was "distressed, wet and bedraggled", Sydney Wildlife volunteer carer Jodie Lewis told AFP.

But she was recovering well with only minor scratches on her feet and was expected to be released back into the wild in the coming days.

"(We've) tried to make sure she is kept as stress-free as possible to get her back out (into the wild)," she said.

Lewis estimated the wallaby, which are rarely seen swimming, was in the water for about 30 minutes. She was told by witnesses it had been chased by an off-leash dog.

.@manlyfastferry saving our wildlife - one wallaby at a time. #lifeisbetterinmanlypic.twitter.com/3wq7UyDGYf

Last month a wallaby startled motorists as it hopped across Sydney Harbour Bridge.

It was monitored by traffic controllers until police cornered the animal and took it to the city's Taronga Zoo for assessment.

Police said it might have come from a golf course in the suburb of Cammeray, more than three kilometres (two miles) away.

It was later released back into the wild.
Click for more trending news