"She is a very old creature, a proper queen of the ocean and a matriarch," Ocearch expedition leader Chris Fischer said for the great white shark. 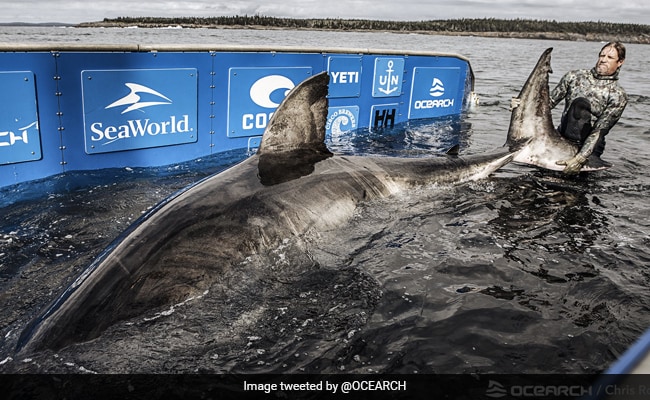 A team of researchers in Canada has tagged a great white shark measuring more than 17 feet in length. Dubbed "Queen of the Ocean", the shark was discovered by a team from non-profit organisation Ocearch in Nova Scotia, Canada, on Friday, reports The Mirror.

At 17 feet 2 inches long, she is the largest shark that the organisation has ever tagged.

"She is a very old creature, a proper queen of the ocean and a matriarch. She has all the scars, healed wounds and discolourations that tell a deep, rich story of her life going back years," Ocearch expedition leader Chris Fischer was quoted as saying by Yahoo News.

The group named the shark "Nukumi" (pronounced noo-goo-mee) after the legendary wise old grandmother figure of the Native American Mi'kmaq people. Nukumi weighs a whopping 3,541 pounds - which is slightly over 1,600 kilograms.

The group also shared a video of the shark - and their posts have gone viral on the social media platform.

"Magnificent creature!" wrote one person in the comments section. "How astoundingly beautiful," another remarked.

Researchers collected samples from the great white shark that will contribute to 21 research projects. Blood, muscle, fecal and skin samples were taken along with bacteria samples off her teeth.

The shark was released back in water after being tagged. Tags will now track her movement over the next five years and record how deep she goes.