Carlos came down with COVID-19 the same week he was supposed to get married. 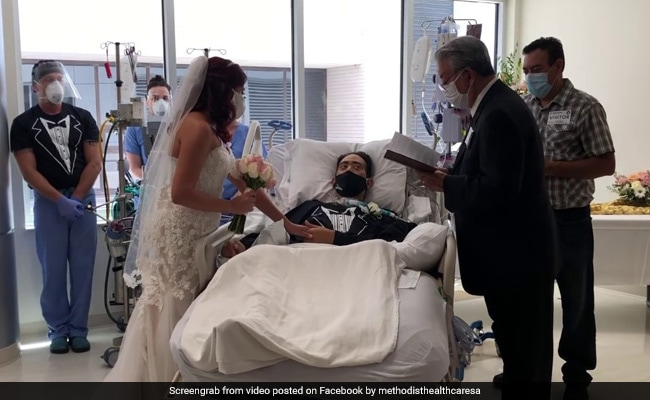 Carlos Muniz married his fiancee from his hospital bed while undergoing treatment for COVID-19.

A man who contracted COVID-19 shortly before he was to get married refused to let the virus come in the way of his plans. Carlos Muniz of Texas was fighting for his life in the Intensive Care Unit of San Antonio's Methodist Hospital, but still managed to marry his fiancee, Grace, from his hospital bed, according to People Magazine.

The couple said "I do" in an intimate ceremony on Tuesday, August 11. The hospital wedding was attended only by immediate family members as Carlos, 41, and Grace became husband and wife.

According to KSAT News, Carlos came down with COVID-19 the same week he was supposed to walk down the aisle. "His condition became critical, and he was placed on ECMO, a form of life support, as a last chance at survival," the Methodist Healthcare System wrote on Facebook.

It was Carlos's nurse who suggested that he and Grace get married at the hospital. "Carlos is capable of doing more now than before. He's fighting for something," his nurse said in a statement.

A heartwarming video shared by the hospital shows the couple getting married in the ICU, with the groom dressed in a tuxedo and the bride in a dress. All the attendees wore masks.

Shared on Tuesday, the video has garnered over 8,400 views on Facebook.

"This special moment not only brought joy and strength to the patient and family, but it also presented a major victory to the COVID-19 staff at Methodist Hospital," the hospital said.

Carlos Muniz is now on the road to recovery and has been taken off of ECMO support.