"I've never seen such a case in my life," a doctor tells news agency ANI after a farmer from Hardoi reportedly chewed off and spit out a snake's head. The farmer says he did it to take "revenge" after the snake bit him. 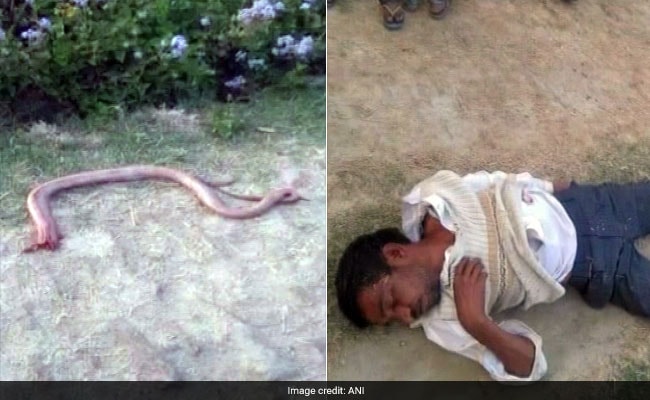 A farmer fell unconscious after biting the head off a snake. He said it was "revenge" for a snakebite

New Delhi: "I've never seen such a case in my life," Hardoi's Dr Sanjay Kumar tells news agency ANI after treating a farmer who bit a snake to take "revenge." The doctor says he's amazed the man survived even after biting the snake. The farmer, identified as Sonelal, reportedly chewed off and spit out the snake's hood after it bit him. He was rushed to a nearby clinic after he was found unconscious in Uttar Pradesh's Hardoi. However, the doctors treating him failed to find any bite marks on the farmer's body, reports The Times of India.

On Saturday, the state-run 108 ambulance service at Madhoganj community health centre received a call to rush to the nearby Shuklapur Bhagar village where a farmer had fallen unconscious, reports the Times of India. When he regained consciousness, he was asked to explain what happened.

"The snake bit me, so I held its head and chewed it off. It died," Sonelal tells ANI. "Then I brought it back to the village. I tore off its head again."

Eyewitnesses also say they saw him ingest part of the snake, identified by some villagers as a python.

Hardoi: A farmer bit off a snake's hood after it bit him in a field; doctor Sanjay Kumar says, 'never saw such a case. The man was alright even biting a snake' (20.02.2018) pic.twitter.com/PibIOvARdW

Promoted
Listen to the latest songs, only on JioSaavn.com
However, doctors at the health centre tell the Times of India that they failed to find any bite marks on the farmer's body. Still, Sonelal's survival after biting a snake has left the doctors and the villagers amazed.

"He chewed off half of (the snake's) head and yet was fine. I haven't seen something like this in my lifetime," a puzzled Dr Kumar told reporters.Click for more trending news