The woman has been arrested and is charged with attempted murder and damage to property. 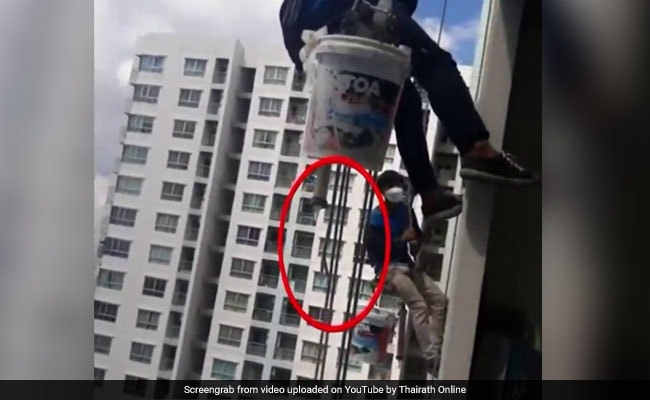 Two painters were left dangling from the 26th floor of a high-rise in Thailand after a woman cut their support rope. The woman -- a resident of the high-rise condominium -- was reportedly angry that she had not been informed before they started the job, police said Wednesday.

The woman has been charged with attempted murder, said Pol. Col. Pongjak Preechakarunpong, chief of the Pak Kret police station, according to the New York Post.

The workers were left dangling hundreds of feet above the ground when the resident of the building snapped a rope that was supporting them. The 34-year-old woman is said to have done it without any warning. The incident took place on October 12.

Footage of the incident has been widely shared on social media. In the video, the workers can be seen literally hanging on for dear life from the 26th floor of the building. The workers began to shout for help, asking the residents to open their windows and let them in.

One of the workers spoke to the media and said that he and his two co-workers were lowering themselves from the 32nd floor when they felt their support rope go slack.

The two workers were finally helped by a resident named Praphaiwan Setsing and her husband. The third worker was safe and was supporting his co-workers from above. “This incident is shocking and should not happen at all,” Ms Setsing was quoted as saying by New York Post.

Authorities haven't yet disclosed the 34-year-old woman's reasons for her actions. According to The Province, the woman, whose identity has not been revealed, initially denied having played any part in the act. However, on Wednesday, she confessed when the police showed her surveillance footage and told her fingerprints were found on the rope. According to local media, the woman was apparently annoyed to find workers outside her window without any notice from her condo.

The woman was arrested on charges of attempted murder and property destruction, Colonel Pongjak Preechakarunpong, chief of the Pak Kret police said. She told the police that she did not intend to kill the workers. If found guilty of attempted murder, she could face up to 20 years in prison, stated the New York Post report.