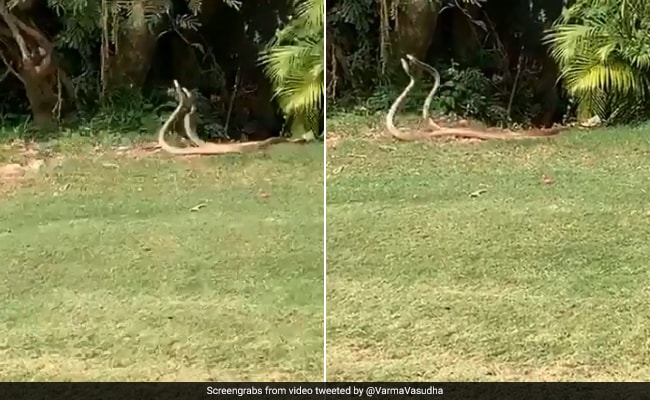 A video of two snakes dancing has left Twitter fascinated.

A video of two snakes dancing together has left Twitter fascinated. The video was shared on the microblogging platform on Wednesday by Twitter user and Bengaluru resident Vasudha Varma, who revealed that it was filmed at a golf course. The 36-second footage shows two rat snakes coiling around each other, sheltered by shrubs and trees growing at the end of a grass field.

A cosy corner in a golf course becomes a dance floor. Gracious, synchronised swirling and twirling! Beauty is nature. @SudhaRamenIFS@ParveenKaswan@rameshpandeyifs@susantananda3pic.twitter.com/0aVyyz27XK

The video has been viewed over 6,000 times on Twitter and collected a ton of comments. Among those who responded to it was IFS officer Susanta Nanda, who confirmed that the snakes were indeed rat snakes and not cobras, as some theorised.

That's mating, you so called nature lovers. Learn to respect their privacy.

Rat snakes are non-venomous snakes that kill by constriction. Some in the comments section identified the dance as a mating dance between male and female snakes. However, according to the Smithsonian Magazine, two snakes coiling around each other does not always mean a mating dance. Male rat snakes also perform a dance by wrapping themselves around each other and "raising their upper bodies in an attempt to subdue each other". This combat dance is done for dominance.