"You expect something a lot worse. This was amazing," said Arapahoe County Sheriff's Deputy. 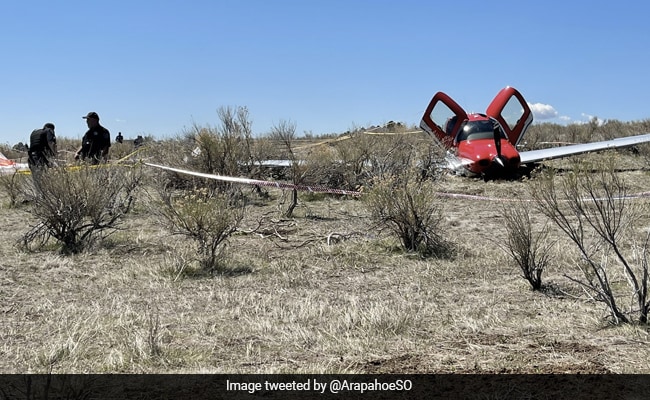 Two planes collided mid-air in the US state of Colorado on Wednesday, and everyone on board managed to walk away from the incident without injuries. The two small planes collided in the air near Denver, where one of them deployed a parachute and drifted to the ground, reports CNN. Two people who were on the plane - a Cirrus SR22 - walked away unharmed after it drifted to the ground.

The other plane, a Metroliner, also managed to land at a nearby airport. According to Arapahoe County Sheriff's Office spokesperson Deputy John Bartmann, the pilot was the only person on the aircraft and did not report any injuries after landing. The tail section of the plane did suffer major damage.

"You expect something a lot worse. This was amazing," Mr Bartmann said. "We've had several plane crashes in our jurisdiction. Never have we seen a parachute be deployed and bring the plane down safely."

Update - PIO on scene of plane crash. Two on board walked away with no injuries. Second plane able to land safe no injuries. Media briefing at noon - at Belleview and peoria just south of the access road to the crash. Look for the @SouthMetroPIO vehicle. pic.twitter.com/8A25hbV06C

The Arapahoe County Sheriff's Department shared a picture from the scene of the crash, saying that the two people on board the aircraft were not injured.

"I think miraculous is a good word," Mr Bartmann told USA Today. "It's 'winning the lottery' kind of luck."

He added that debris from the crash were scattered widely and said people who found parts of the plane should contact authorities.

The National Transportation Safety Board said in a tweet that the incident occurred as the two planes were landing. An investigation into the incident has been launched.