Two Large Pythons Crash Through Ceiling. They Were Fighting Over A Female

"Both these snakes were two of the fattest snakes I've seen," said the snake catcher. 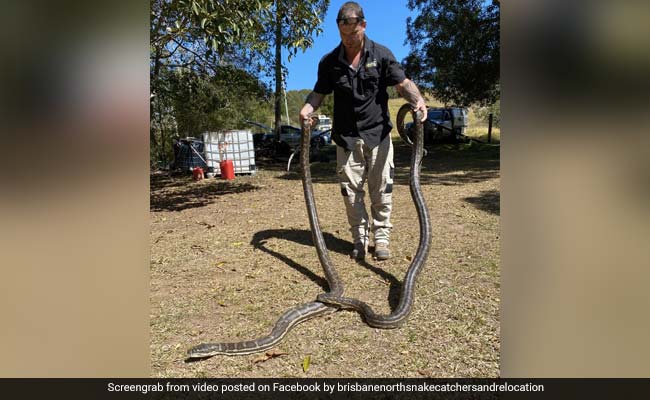 A snake catcher was called to remove two large pythons from a house in Brisbane.

In a hair-raising incident, a man in Australia returned to his home on Monday to find two large pythons slithering on the floor. They had crashed through his kitchen ceiling.

The shocked homeowner from Brisbane contacted Brisbane North Snake Catchers and Relocation service to remove the snakes. "Received a call to Laceys Creek after customer found two very large Coastal Carpet Pythons (Morelia spilota mcdowelli) in his house when he got home," the snake catching service wrote on Facebook, sharing images of the enormous snakes and the house where they were found.

"Both these snakes were two of the fattest snakes I've seen, as in the amount of muscle they had," snake catcher Steven Brown told CNN, adding that they were "very well fed."

According to the BBC, the two male snakes were fighting over a female snake which has not yet been located.

One of the snakes measure 9.5 feet, while the other was 8.2 feet-long. Photos shared on Facebook Monday show the damage they caused as they fell through the roof.

"This is my father's house. Thank you for taking them away!! Am a bit worried about the female that is still on the loose," wrote one Facebook user in the comments section.

"This is my biggest fear!" another said.

The two snakes were captured safely and released into a forest.