Several internet users agreed with Mr Dharmakumar. Others, however, simply pointed to alternatives that were easier on the pocket. 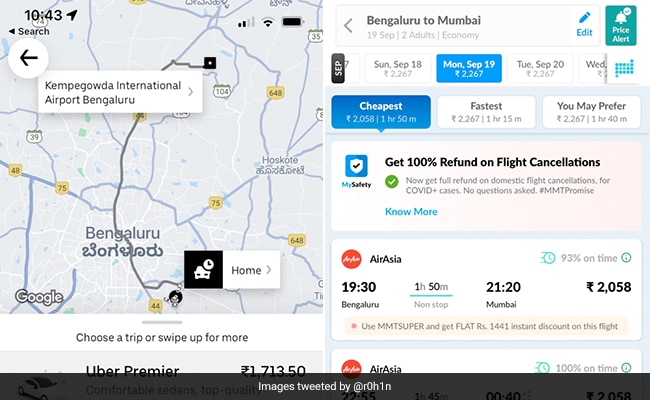 The post has triggered a social media debate on commuter problems in the city.

The CEO of The Ken Web, Rohin Dharmakumar, recently took to Twitter to slam the extremely high prices of a cab ride to the Bengaluru airport. "1 hour Uber to Bengaluru airport costs 60-130% the price of a 1.5-hour flight to Mumbai," Mr Dharmakumar wrote while sharing two separate screenshots to support the same.

The first image showed the prices of Bengaluru to Mumbai flights, starting at Rs 2,058. The other picture showed an Uber cab ride from Mr Dharmakumar's home to the Kempegowda International Airport. In the screenshot, while the Uber Premier was priced at Rs 1,713, Uber XL was charging Rs 2,638 for the same distance.

Mr Dharmakumar shared the post on September 12. Since then it has triggered a social media debate on commuter problems in the city. Several internet users agreed with Mr Dharmakumar and said that the airport being an hour and a half away from the city is an inconvenience. Others, however, simply pointed to alternatives that were easier on the pocket.

One user wrote, "Bengaluru is expensive city no doubt but cab aggregators are not the only option people have. 1. Cheapest, Use Indian railways airport link train & shuttle bus. 2. Use BMTC & KSRTC airport bus & fly bus. Time taken & comfort will not be compromised. These two are best options other than cabs."

Another said, "If u want to go by private then u should have to bare or else use public transport. Don't spread your negative thoughts." A third simply commented, "Typical Banglaore things." "It could also take longer to get to the Bengaluru airport than flying to Mumbai," jokingly added fourth.