"Whatever way you look at it, Novak Djokovic is a lying sneaky a***hole," Rebecca Maddern was heard saying 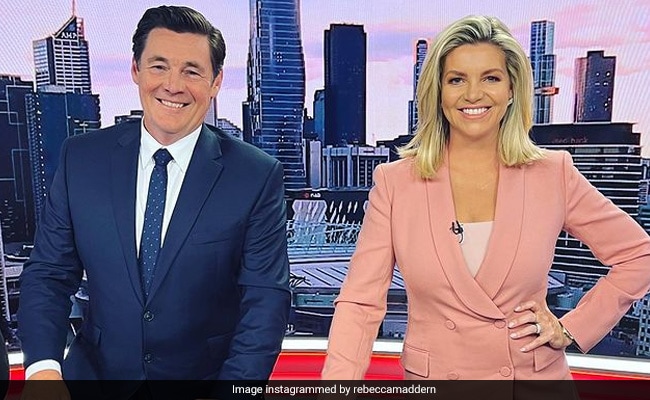 A leaked video which shows two Australian TV anchors blasting Novak Djokovic during a private conversation has gone viral online. Mike Amor and Rebecca Maddern of Seven News Melbourne were heard badmouthing Djokovic off-air, referring to him as a "lying, sneaky a**hole" - apparently in reference to the Serbian tennis star making a false declaration about his travel history before arriving in Australia.

In the off-air conversation which was leaked online, the Seven News presenters were heard criticising Novak Djokovic while sitting in the studio. According to Sky News, the conversation took place shortly before they presented the station's 6 pm news program.

"Whatever way you look at it, Novak Djokovic is a lying sneaky a***hole," Ms Maddern said.

"He got a bullshit f***ing excuse and then fell over his own f***ing lies. It's just what happens, right, that's what happened," her colleague Mike Amor responded. "And then, he now then ticking he didn't go to Spain," Ms Maddern said in reply.

Mike Amor and Bec Maddern forgetting the camera/mic is always on ???????????? #Djokovicpic.twitter.com/shre3hZpH8

The leaked video has divided opinion on social media, with some enraged at the TV presenters and others pointing out that a private conversation between two people should never have been made public.

According to Daily Mail, Craig McPherson, Seven Network Director of News and Public Affairs, siad that an investigation has been launched to find the person responsible for leaking the video online. Rebecca Maddern, meanwhile, has apologised to her bosses.

Serbian tennis star Novak Djokovic found himself at the centre of controversy after arriving in Australia on January 5, carrying a medical exemption from vaccination due to a positive coronavirus test on December 16 last year. After overnight questioning at Melbourne airport, border officials decided the exemption was not valid, cancelled his visa and transferred him to a detention centre pending deportation. The visa cancellation was overturned in court on Monday.

Australian media, however, have also focused heavily on the accuracy of Djokovic's travel declaration, reportedly filled out before he flew in from Spain.

Djokovic has conceded he submitted a false declaration to the Australian government about his travel history between flying to Melbourne, blaming it on his agent.

"On the issue of my travel declaration, this was submitted by my support team on my behalf," Djokovic said on Instagram.

"My agent sincerely apologises for the administrative mistake in ticking the incorrect box about my previous travel before coming to Australia," he said, calling it "human error".

A copy of his declaration showed a tick in the box to confirm he had not and would not travel in the 14 days before landing in Australia on January 5.

But the player had reportedly been in Serbia before Spain.