Tokyo Olympics: Savita Punia managed to save all the nine shots directed at her during India vs Australia 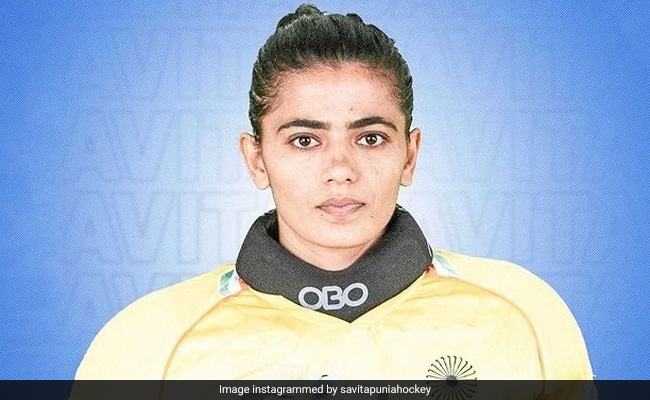 Goalkeeper Savita Punia has been nicknamed 'The Wall' on social media.

The Indian women's hockey team stunned Australia to enter the semi-finals in Tokyo Olympics on Monday. The team scripted history by qualifying for the Olympic Games semifinals for the first time, beating three-time champions Australia by a solitary goal. Coming into the match, the odds were against India as world no. 2 Australia, a mighty unbeaten opponent, awaited them in the last eight round. India put up a strong performance to eke out the narrow win over the Hockeyroos. Drag-flicker Gurjit Kaur rose to the occasion when it mattered and converted India's lone penalty corner in the 22nd minute to surprise the Australians.

Goalkeeper Savita Punia, meanwhile, managed to save all the nine shots directed at her, earning the well-deserved epithet of "The Wall" on Twitter.

Our women's #hockey team too has entered the semifinals at #Tokyo2020 beating Australia in a thrilling quarterfinal.

What a match! Great game by everyone, Savita was phenomenal.
You have won our hearts @TheHockeyIndia ????#INDvsAUS#TeamIndiapic.twitter.com/MtfliLmzWY

8 PC to GBR, but India did not concede a single goal.

7 PC to Aus, but India did not concede any goal.#INDvsAUS#hockeyindiapic.twitter.com/6fBkbr7aVf

Take a look at some other reactions:

Sreejesh was ???? yesterday, today Savita is the ????. What a powerhouse performance from her! #TokyoOlympics#Tokyo2020#hockeyindia#Hockey#Cheers4India#teamindiapic.twitter.com/20yXnevMDG

"If cricket had Rahul Dravid, hockey has Savita and Sreejesh. Great Walls," wrote one Twitter user.

If Cricket had Rahul Dravid, Hockey has Savita and Sreejesh. Great Walls.

More power to the Goalies... pic.twitter.com/BK9yjTs654

Nothing
Just a pic of Savita standing at the Indian Goal Post
This girl saved 8/8#INDvsAUS#Hockeypic.twitter.com/r1GM6nyVHe

It was a classic story of the triumph of the underdogs as India beat Australia 1-0 to enter the semi-finals, and comparisons to Chak De! India were inevitable. In the 2007 film, Shah Rukh Khan played the role of the coach of Indian women's hockey team. The underdog team went on to win the World Cup against all odds in the hit movie.

On social media this morning, Chak De! India comparisons abounded after India's stunning victory, which came only a day after the Indian men's team entered the Olympic semifinals following a 49-year gap.

Boxer Manish Kaushik was all praise for the team.

What a great show by @TheHockeyIndia Women's Team ???????? ???? They have created history by entering #Olympics semifinals for 1st time after beating #Australia by 1-0.

The entire nation is proud of you girls! Go for Gold ????#Cheer4Indiapic.twitter.com/9bMFXTsOl9

Some even shared scenes from the 2007 film

Take a look at some of the other jubilant reactions after India vs Australia:

Prayers of 130 Cr Indians are with you, go for gold girls.#IndiaAtOlympics#Cheer4Indiapic.twitter.com/7LKHcaSBh2

India's best performance in the Olympics came way back in the 1980 Moscow Games where they finished fourth out of six teams. The Rani Rampal-led side will play Argentina in the semifinal on Wednesday.