The equestrian rider from Egypt put up a stellar performance at the ongoing Tokyo Olympics and secured a place in the final. With a clear run of 17 obstacles in time, Nayel Nassar is now one step closer to victory at the tournament. 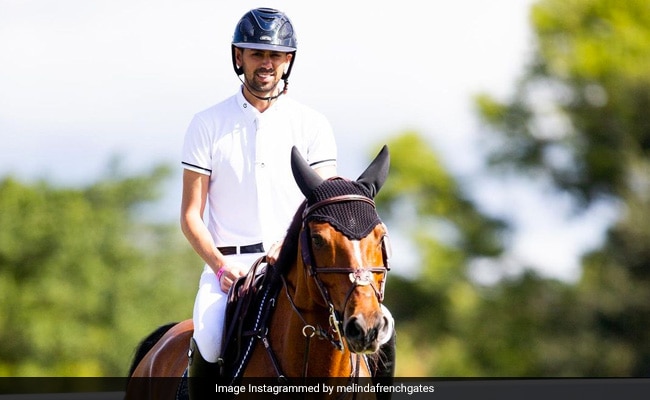 Nayel Nassar is engaged to Jennifer Gates, the daughter of Bill Gates and Melinda French Gates..

Hours after a Washington judge announced that Bill Gates and Melinda French Gates are officially divorced, the duo has something to cheer about thanks to their future son-in-law Nayel Nasser.

The equestrian rider from Egypt put up a stellar performance at the ongoing Tokyo Olympics and secured a place in the final. With a clear run of 17 obstacles in time, Mr Nassar is now one step closer to victory at the tournament. Mr Nassar is engaged to Jennifer Gates, the daughter of Mr Gates and Ms Melinda. Therefore, it came as no surprise that both conveyed their support for Mr Nassar on social media.

Sharing a photo of Mr Nassar, Ms Melinda said that this time around the Olympics was particularly special due to the rider's presence. In a note, she said, “I always love watching the Olympics. The Tokyo Olympics are particularly special because I get to cheer on my future son-in-law, Nayel Nassar. We are so proud of you, Nayel (and Igor),” referring to Mr Nassar's horse, Igor van de Wittemoere.

Mr Gates, too, said on the photo-sharing app that he was rooting for Mr Nassar. Ahead of the qualifiers, he had said, “I'm rooting for lots of the athletes in Tokyo right now—but none more than my soon-to-be son-in-law, Nayel Nassar. Good luck, Nayel.”

Mr Nassar shared his excitement at having raced to the final. In a lengthy post, he said, “Igor is clear in our Olympic debut and sneaks into the individual final. Thank you, Igor and everyone rooting for us near and far. Only part of the job done, but so excited to be among the last ones standing after a very unforgiving qualifier.”

Mr Nassar and Ms Jennifer had announced their engagement in January 2020. While the details on when the two will tie the knot remain unclear, Ms Jennifer had celebrated her bachelorette in June, this year.

Meanwhile, Monday saw the official dissolution of Gates' marriage. According to court records, neither party will receive "spousal support" or change their names. The judge also ordered the two to divide their property according to the terms of the separation contract.

The contract, in question, remains confidential as per the terms of the divorce.