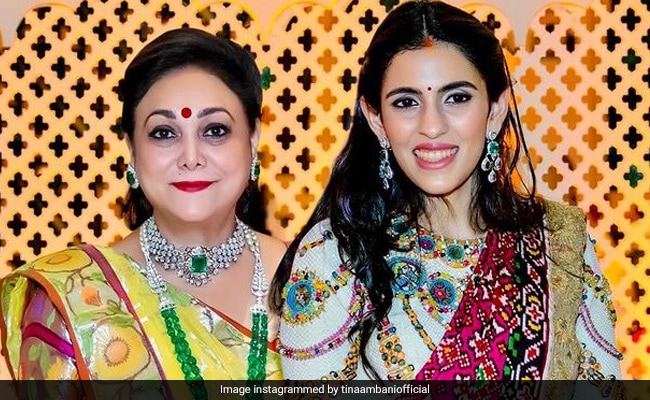 Tina Ambani posted a photo of herself with Shloka, in which both are seen dressed in Indian attire.

Tina Ambani today shared a special note dedicated to Shloka Mehta Ambani, wife of her nephew Akash Ambani on Instagram, to greet her on her birthday. The former actress, who is married to industrialist Anil Ambani, posted a photo of herself with Ms Shloka, in which both are seen dressed in traditional Indian attire.

In a note attached to the photo, she spoke of the happiness of being able to witness Ms Shloka "blossom." She wrote in the caption, "A beautiful girl, now a wonderful woman, wife, mother. It's been a joy to see you blossom. Wishing you a year that brings every happiness and new discoveries. Happy birthday."

Ms Ambani's social media feed is filled with posts about her family. Last week, on the occasion of her father-in-law Dhirubhai Ambani's 19th death anniversary, she posted a series of photos and penned a note paying homage to the business tycoon. In the post, she expressed how the family remembered the businessman fondly and missed his "guidance" every day.  She wrote, "Pappa, your presence is felt always. Your guidance is missed, your memories are treasured, your light is cherished. Today and every day."

Ms Ambani, who is quite active on social media, also shared a video montage of some treasured moments on June 30, which is observed as World Social Media Day. Along with the video that featured her family and friends, Ms Ambani wrote, "Loving my journey on social media.... reliving memories, making new ones, connecting, learning and growing."

Similarly, on the occasion of her husband Anil Ambani's birthday, she had shared a photo of the family and dedicated a warm note to him. She wrote, "Devoted to the family, a tireless worker, deeply spiritual and remarkably reserved, a source of unconditional support and strength to us all, the wind beneath my wings. This is the man I know and love. Happy birthday Anil… you are my happiness."

Anil Ambani married Tina Ambani in 1991. He is the son of the founder of Reliance Industries, Dhirubhai Ambani and his wife Kokilaben.