In the letter, the boy said that he hopes the footballer is not upset for too long 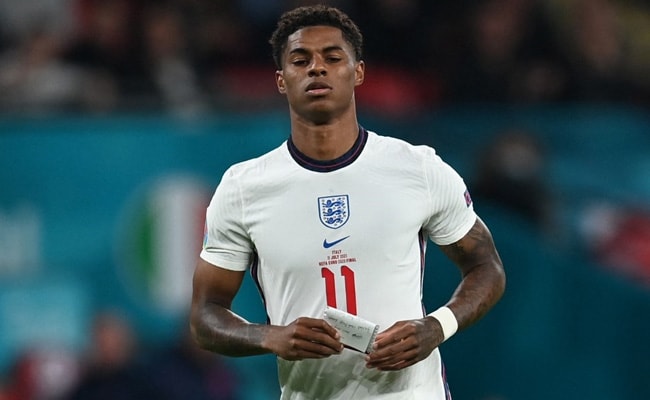 England's defeat in the final of Euro 2020 at Wembley Stadium could well be a scene out of a dramatic sports film. Following the 1-1 end to the match after extra time, Italy went on to win the championship after England's Marcus Rashford, Jadon Sancho and Bukayo Saka missed their penalties. The three players who missed England's penalties on Sunday became the target of a stream of racist abuse on social media. British Prime Minister Boris Johnson and Prince William were among those who condemned the racist abuse as "appalling" and "sickening". There was also a large section of the internet who applauded and supported the team's effort. And a heart-warming endorsement of support for striker Marcus Rashford came in the form of a letter penned by a nine-year-old.

In it, the nine-year-old described Rashford to be a “hero” and declared that he was proud of the footballer. The warm note from Dexter Rosier was shared on social media by his mother, Samantha Rosier.

In the letter, the boy wrote, “Dear Marcus Rashford, I hope you won't be sad for too long because you are such a good person. Last year you inspired me to help people less fortunate. Then last night you inspired me again, to always be brave. I'm proud of you, you will always be a hero. From: Dexter Rosier. Age: 9”

Sharing the tweet, the boy's mother said, “My heart, this kid. What a team and what a month all the joy, excitement and inspiration they've given us.” She also tagged the players.

The tweet and the note soon went viral on social media. TV host and presenter Piers Morgan shared the letter.

Tagging the footballer, he wrote, “Hey Marcus Rashford — I think this young man speaks for the vast majority of people in this country.”

Hey @MarcusRashford - I think this young man speaks for the vast majority of people in this country. ???? https://t.co/HMfbCJG8O0

Several fans of the game used the boy's letter to express their support for the players.

Responding to his mother's original post, one user said, "What a wonderful, beautiful letter, your son is amazing — you are obviously an excellent parent."

What a wonderful, beautiful letter, your son is amazing - you are obviously an excellent parent ❤️

Another user said, "This kid speaks for me."

This kid speaks for me. https://t.co/DPVf9sSxYA

This is what we need. This little guy speaks for us all. ???? https://t.co/kLO8GjgOSN

"Let the racists do one. This 9-year-old kid says it right. There's a better time coming," a fan pointed out.

Let the racists do one. This 9 year old kid says it right. There's a better time coming. #RashfordSanchoSakahttps://t.co/LYN7U838iQ

Thanks to the power of the internet, the letter was brought to Rashford's attention. Overwhelmed by the affection and warmth, the footballer shared the letter along with a bunch of other fan mails. The images of the letters were attached to a powerful statement in which the footballer condemned the racially charged abuse directed to him and his teammates.

Among other things, he said, "I can take critique of my performance all day long, my penalty was not good enough, it should have gone in, but I will never apologise for who I am and where I came from." He also added, " For all the kind messages, thank you. I'll be back stronger. We'll be back stronger."

Tell us what you think of the heart-warming letter by the nine-year-old in the comments section.