The #Trashtag Challenge Is Trending. Here's What It's All About

"I think it's our responsibility to keep our planet clean. It doesn't matter who made the mess because it belongs to all of us." 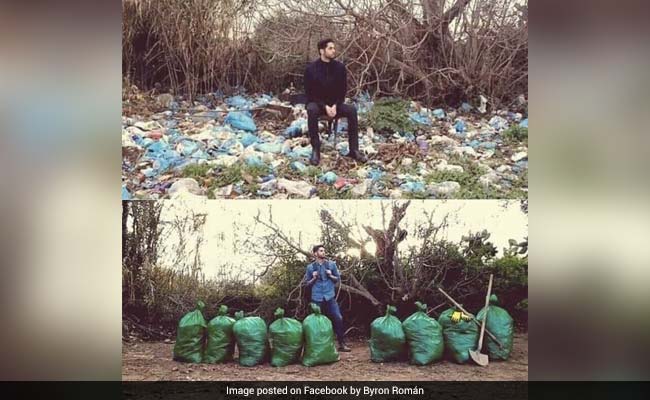 Oftentimes, news stories with the words "teenager" and "challenge" reveal some dangerous thing teens are daring each other to do, all for views online.

This is not one of those stories.

This is about the #trashtag challenge - one encouraging teens to do something constructive. The trend has been around for years - UCO Gear, an outdoor lighting company in Seattle started using the hashtag in 2015 to "encourage others to pack out trash when they spot it on the trail." But Facebook user Byron Román helped it grab widespread attention online - and aimed it at teens - posting on March 5 a before-and-after picture, showing a dramatic cleanup in a garbage-strewn area in the woods.

"Here is a new #challenge for all you bored teens," Román wrote. "Take a photo of an area that needs some cleaning or maintenance, then take a photo after you have done something about it, and post it."

Román, a 53-year-old mortgage loan officer from Phoenix, said he had seen the photo on a friend's Facebook page, but it appears it came from an ecotourism company, Happy Tours GT in Guatemala. The company posted the picture March 4 with a similar caption in Spanish, which, Román said, he translated into English. Then, he said, he added the hashtags #trashtag and #BasuraChallenge and directed the message toward teens.

He said it was not meant to insult teenagers, but encourage them.

The Washington Post reached out to Happy Tours GT for comment, but the company said in a message that it only helped the image go viral and does not know where the picture originated or who the man in the photo is. Román said he had hoped that the man would have surfaced by now, but he has not yet been identified.

Even as the identity - or intentions - of the person in the photo remains a mystery, Román's Facebook post continued to spread. By Tuesday, it had been shared more than 323,000 times and drawn a couple dozen comments, most from social media users who appeared to be adults discussing ways to get teens into it.

"Not just for teens," another replied. "Let's go humanity..."

Román said he has since received hundreds of messages from people around the world, including from teachers and parents, sending him photos of their own cleanups with their children.

"I think it's our responsibility to keep our planet clean. It doesn't matter who made the mess because it belongs to all of us," Román said in a phone interview Tuesday with The Washington Post. He said that he has set up a second Facebook account called "Basura Challenge Arizona" to encourage people in his own community to join him in the effort to help clean up the planet. "It's our job," he said.

Román acknowledged in a subsequent post that he did not start the #trashtag challenge, or the #basurachallenge, the Spanish word for "trash," but added, "I am glad my post reached every corner of the world."

And apparently, it did - people from around the United States and the world posted cleanup photos over the weekend on Facebook, Instagram, Reddit and Twitter, and urged others to do the same. The Post could not independently confirm the veracity of the photos.