Heavy rains continued to lash Chennai and its nearby areas on Thursday morning, causing waterlogging in several parts of the city. 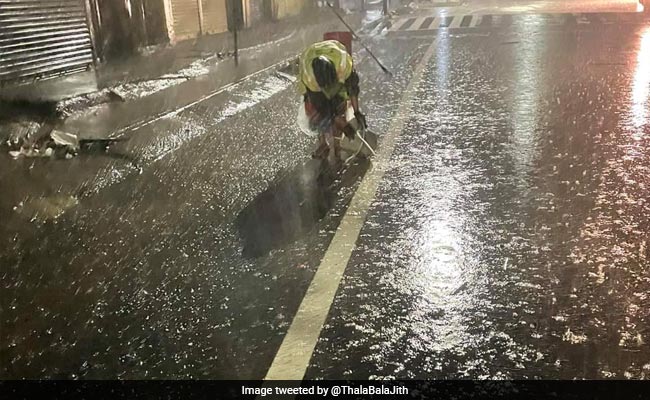 A sanitation worker was photographed amid heavy rain in Chennai.

The Twitter user who shared the pictures online on Tuesday night said that he was heading home after work when he spotted the sanitation worker.

"Saw a sanitation worker women who's been doing her work despite the heavy rain," he wrote on the microblogging platform. "I know it's their job but still working during these kind of times is really respectable and appreciable," he added - a sentiment that many agreed with.

Been heading back to home in the heavy rain, Then saw a sanitation worker women who's been doing her work despite the heavy rain. I know it's their job but still working during these kinda times is really respectable and appreciatbale.

The images have racked up over 3,300 'likes' and a ton of appreciative comments on Twitter. They were also re-tweeted by the official Twitter account of the Greater Chennai Corporation.

Hats off.. during the tough times #chennai#chennaifloods#ChennaiRains

"Kudos to her for what she is doing," another said.

Chennai and suburbs in Chengalpet, Kancheepuram and Tiruvallur districts have seen intermittent rain since Saturday morning. Today, arrivals at Chennai Airport have been suspended till 6 pm in view of severe rains.

In the midst of this, several instances of essential workers going the extra mile have emerged on social media. Footage of TP Chatram Police Station's Inspector Rajeshwari carrying an unconscious man on her shoulders has been widely shared on Twitter. The inspector was filmed carrying the man to an autorickshaw in a bid to rush him to the hospital.

#TamilNaduRains | TP Chatram Police Station's Inspector Rajeshwari carries an unconscious man, on her shoulders, to an autorickshaw in a bid to rush him to a nearby hospital.#Chennai is facing waterlogging due to incessant rainfall.

Chennai police personnel were also photographed carrying a woman to safety. The woman has been left stranded by the rain. She was brought safely to the house of her relatives by police and firefighters.

Heavy rains continue to lash Chennai and its nearby areas on Thursday morning, causing waterlogging in several parts of the city. The Chennai Corporation has deployed 570 electric pumps to remove floodwater.