The driver said he manually hit the brakes after spotting the truck, but it was too late to avoid the crash. 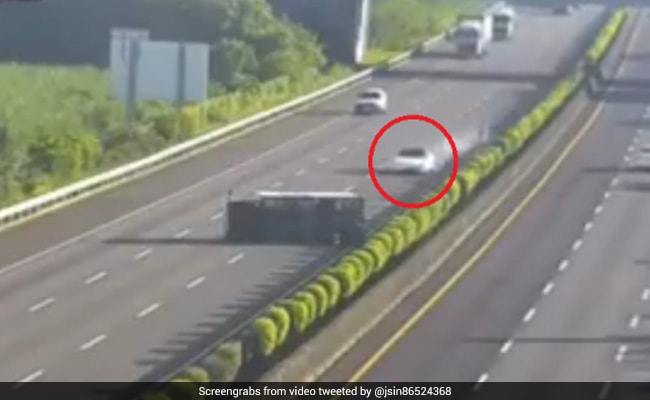 A Tesla Model 3 was filmed crashing into an overturned truck.

Shocking surveillance footage has captured the moment a Tesla vehicle, allegedly operating on Autopilot, crashed into an overturned truck in Taiwan early Monday morning. CCTV cameras captured the Tesla Model 3 failing to stop for an overturned truck and slamming right into it on a highway. According to Taiwan English News, the driver of the Tesla, Mr Huang, said that his car was in Autopilot mode and travelling at around 110 kilometers per hour at the time of the accident. He told emergency first responders that it did not have the Full Self-Driving feature engaged.

Tesla offers two types of semi-autonomous technology with its electric cars - Autopilot and Full Self-Driving. Autopilot enables the car to steer, accelerate and brake automatically for other vehicles and pedestrians within its lane. Full Self-Driving is more advanced and also offers additional features like Navigate on Autopilot, Auto Lane Change, Autopark, Summon, and Traffic Light and Stop Sign Control.

Smoke can be seen rising from the Tesla's tyres seconds before the crash. Mr Huang said he manually hit the brakes after spotting the truck, but it was too late to avoid the crash. Luckily, he managed to escape without any injuries, reports Fox News.

CCTV footage of the incident has been widely shared online.

????????????
Tesla Model 3 plows info overturned truck on highway. I'm sure the driver was paying complete attention to the road and wasn't relying on autopilot because he was told the car could drive itself....$TSLAQpic.twitter.com/cHjueqH0j4

On Twitter, the video has been viewed over 2 lakh times, sparking a conversation around road safety.

Bigger question is what was the driver doing to not notice an over turned semi from that far away and initiate a manual stop beforehand?

Honestly this guy obviously wasn't paying attention AT ALL. While I'll admit autopilot is NOT ready for self-driving without a human to oversee its operation. 100% of the blame is on the driver as he has PLENTY of time to stop with the truck in clear view for well over 1500ft.

Tesla has yet to comment on the incident. Its partially automated driving system has previously been involved in other crashes. In February, the National Transportation Safety Board of US found that Tesla's partially automated driving system steered an electric SUV into a concrete barrier on a Silicon Valley freeway because it was operating under conditions it couldn't handle and because the driver likely was distracted by playing a game on his smartphone.

"Nothing Is Impossible": This Specially Abled Schoolboy Shows How