After mocking WhatsApp's new policy of sharing user data with Facebook with a classic two Spider-Man meme, Telegram found another fitting meme to take a dig at the messaging app. 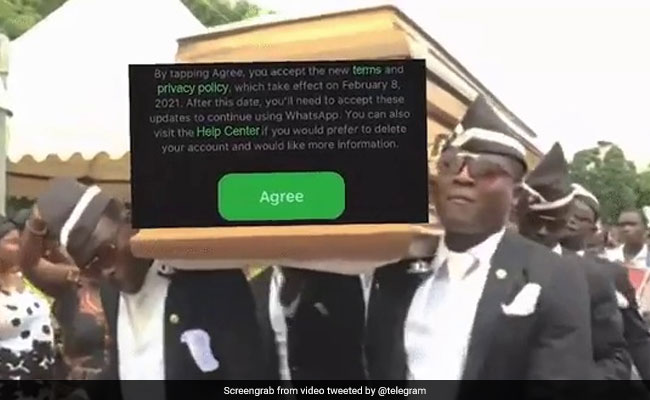 After WhatsApp announced a change in its privacy policy, signaling increased data sharing with parent company Facebook, thousands of wary users announced their decision to switch to other messaging apps. The popularity of messaging apps like Telegram and Signal rose after WhatsApp's announcement last week, with both services adding new users in huge numbers. Telegram, which emerged as one of the top alternatives to WhatsApp, seems to be having a lot of fun at WhatsApp's expense.

After mocking WhatsApp's new policy of sharing user data with Facebook with a classic two Spider-Man meme, Telegram found another fitting meme to take a dig at the messaging app.

Telegram's pointed dig at WhatsApp has racked up over 2.5 lakh 'likes' and thousands of reactions.

The reason am downloading telegram is because of their Twitter guy????

I feel like they've got a 'no clap backs' policy. I'm still waiting on the last one. pic.twitter.com/7xTvQoMMlw

A few days ago, Telegram had shared another 'no caption needed' meme on WhatsApp.

Meanwhile, messaging app Signal also celebrated the rise in their popularity. On Saturday, it shared a snapshot which shows Signal topping the list of free apps, relegating WhatsApp to the second spot.

Signal is an encrypted, privacy-focused messaging app. Developed by a nonprofit foundation, it is supported by user donations. Like Signal, Telegram focuses on user privacy too, giving users the option to use its Secret Chat feature to bring full end-to-end encryption of chats.