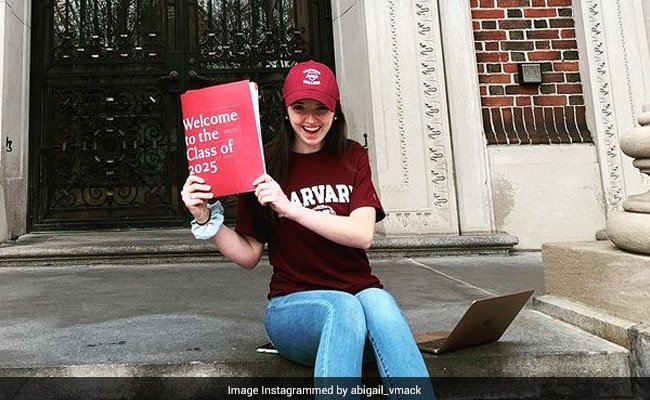 The Internet has found inspiration in a teenager called Abigail Mack and for all the right reasons. The 18-year-old girl from Massachusetts recently secured admission to Harvard University. However, what impressed the admissions board at Harvard and won over the internet was her admissions essay on losing her mother to cancer, which she narrated on TikTok. The online community was in awe of her determination and strength. Abigail beautifully related her journey that has moved many of the aspiring applicants as well.

She started her essay by declaring, “I hate the letter 'S.' Of the 1,64,777 words with 'S,' I only grapple with one. To condemn an entire letter because of its use .0006 per cent of the time sounds statistically absurd, but that one case changed 100 per cent of my life. I used to have two parents, but now I have one, and the 'S' in 'parents' isn't going anywhere.”

In a gut-wrenching revelation, she added, "I can't get through a day without being reminded that while my friends went out to dinner with their parents, I ate with my parent. As I write this essay, there is a blue line under the word 'parent' telling me to check my grammar; even Grammarly assumes that I should have parents, but cancer doesn't listen to edit suggestions.”

In a post on Instagram, Abigail shared her happiness at making it to Harvard. She wrote, “It's officially official — I've committed to Harvard! I'm so unbelievably grateful and I can't wait for the next four years.”

Her essay further focused on how she immersed herself in extracurricular activities such as theatre, academics, and politics. She wrote about her experiences while working as a fellow on Senator Ed Markey's re-election campaign. Abigail pointed out that she taught the volunteers how to phone bank for Joe Biden's campaign.

She is yet to find her ultimate dream and before that, wants to try every possibility.