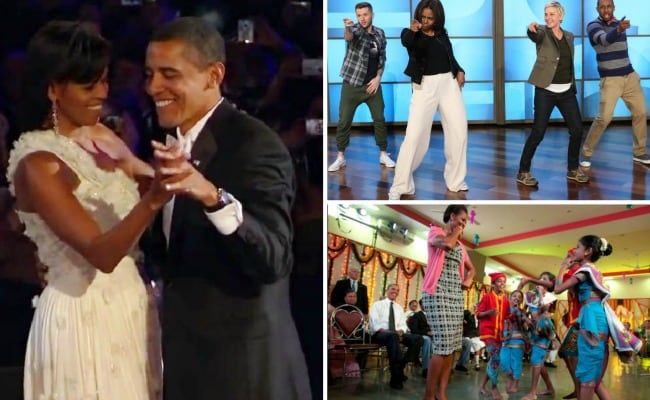 The video of Michelle Obama dancing with Ellen Degeneres on her talk show has taken the internet by storm and we're sure you've seen it by now. So you'll agree when we say that Mark Ronson's UpTown Funk never seemed funkier as it did when FLOTUS, Ellen and the All Stars from the reality dance show So You Think You Can Dance moved to it in perfect synchronization.

We think this was smoother than a fresh jar of Skippy. Do you?

This dance routine comes as a part of Michelle's Let's Move initiative, which began in an effort to coax everyone to live a healthier lifestyle. Let's Move has reached its fifth anniversary and to celebrate it FLOTUS has started a new fun challenge called #GimmeFive which asks everyone to incorporate five new healthy things into their lifestyle. Beyonce took the challenge as did Hugh Jackson, Ryan Seacrest and many more other celebrities.

But this isn't the first time Michelle has taken to the dance floor, she's done it over and over again since becoming the First Lady of the United States. Mrs Obama loves to dance, and boy is she good at it.

Here's our personal best of five other times Mrs Obama absolutely blew us away on the dance floor:

1. Michelle set the tone for what her tenure as First Lady was going to be like at her 'First Dance' with the then newly elected President Obama. With a little help from Beyonce, of course.

2. During the Obamas' first visit to India in 2010, all anyone could talk about was Michelle Obama dancing. Sorry President Obama, but the First Lady won that visit hands down.

This is FLOTUS dancing to the title track of Rang De Basanti with 33 physically challenged children from the NGO Make a Difference's Mumbai chapter.

3. She did not stop there. The very next day, Mrs Obama charmed us as she danced with the kids at a Mumbai school to a Marathi number.

4. Who better to rock a Beyonce number than the super-fit Michelle Obama? This is her doing 'The Dougie' at a middle school in the US. Now that's how you make exercising fun - just dance!

5. And then there was this: Dancing with talk show host Jimmy Fallon. Michelle Obama showed us what a mother's routine is like... through dancing. Take a bow FLOTUS, you're incredibly cool.

Which one do you like the best? Tell us in the comments box below.